In preparation for the UCI Marathon World Championships I headed over to Austria for some hill training. Whilst looking for a local race to compete in, I came across the SellaRONDA which turns out to be part of the UCI XCM World Series. Being only 1.5 hours down the road from my accommodation I did some begging and pleading to get an entry. I'm pretty stoked I did. Elite riders get free entry which includes a bag, shirt, jersey, drink bottle and access to some awesome feed zones!

The SellaRONDA was advertised as a 84km race with 4300vm of climbing. The World Champs (next weekend) is supposed to be 94km with 4400vm of climbing so this would serve as a perfect gauge of fitness and give me an idea of pacing for an event with so much climbing. My plan was to ride conservatively to ensure I still had some left at the end of the race to finish strong. 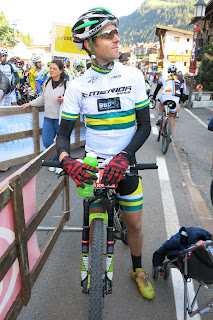 Driving around Italy is often a challenge in itself. Add to this not being able to read Italian and my dad ends up driving down the starting chute 30 minutes before the girls start!

The race started as I had expected, FAST! With a cap of over 3000 riders on the line it was always going to be a battle to stay towards the front. My brother filmed the start which lasted for about 5 minutes as riders made their way down the street to cross the line to start.

With a race altitude similar to Thredbo at around 1600vm I was already feeling the dizzying effects before the first climb which went up to 2300vm. My legs still felt fine but I was feeling quite light headed up the top and the lack of marking didn't seem to make choosing lines any easier.

The start of the first downhill was a tight walking trail down an open grass field. I followed the walking trails for a couple of minutes before noticing the straight line that everyone else had taken to get out of sight! Dodging some of the female riders that started 30mins earlier I was seriously finding it hard to follow where the track actually went. It felt like an adventure race where all you could do was look ahead for an arrow or another rider that hopefully was both in the race and going the right direction. Midway down this 800vm downhill my only drink bottle escaped which had me looking for other bottles that had shared the same fate. 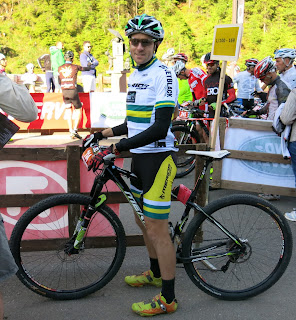 I caught up to some elite boys further down the hill and managed to have a little over the bars taking a chance down a single track line that took out a corner from the gravel road we were headed down. I was given advice to "stay on the windy" perhaps as it was safer or perhaps that's what is expected? With a seat now bent down at 30 degrees the remaining 75km was going to be interesting.

I stopped at the first feed zone to grab a couple of bottles and began the second big climb. This one, at 600vm, was the smallest of the 4 bergs. My support crew was waiting up the top and they counted me in about 37th place. I was pretty happy with top 40 considering the altitude and amount of climbing involved.

After following a couple of riders down the next hill I learnt how to hit fire road corners Euro style. It's foot out, hold on and let the bike drift as it pleases. While it does look a little old school it certainly made riding at ridiculous speeds a little safer. This downhill went to the lowest part of the course at just over 1400vm. The next climb went to just over 2400vm. I would guess 200vm was completely unrideable. I thought I did well to ride how much I did but the 4wd track towards the top just turned into loose gravel and I joined a small walking crew. I made an effort to walk faster and kept the pace on as the trails navigated high through the mountains. In this section there were several snow crossings and single trail that had serious consequences for falling off the side. At the 45km feed I was just over 20mins behind the leaders and my support crew were more interested in smashing apple strudel and hot chocolate rather than counting positions...

After this feed there was another decent downhill before the course had its only flat fire road that lasted around 2km where I caught another 3 riders and we worked together against the headwind. During the next uphill I seemed to pick up a few positions and my legs were still feeling pretty good. With 10km to go my Garmin was reading 3700vm of climbing. With 4300vm advertised I kept a little in the bank waiting for another significant climb but also kept the pace on to see if I could pick up any more riders. At the 1km to go mark there was no chance of another hill and with a final effort I caught up to 20th place but needed another 100m to get him before the line!

I need to thanks lots of people for helping me get to Europe this year. I'll do this after my World Champs race report after next weekend. Now I just need to loose another few kgs and find my climbing legs to keep up with the fast boys!