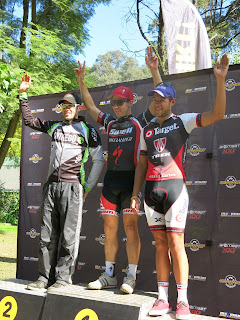 The Convict 100 is a great event. I think I have done them all except for in 2008 just after breaking some vertebrae  For me it's only a 5-6hr drive which makes it one of the closest marathons. Camping at the venue is easy with lots of food options available and I'm now always prepared for how cold St Albans can be at this time of year. It's one of the few marathons I don't drink much in the day before as I dread getting up in the middle of the freezing night to visit the toilet!

Last year the Convict 100 was part of the XCM series which attracted lots of Elite riders from around the nation. This year there was still over 40 in the Elite category with around 700 riders attempting the full 100km distance. From the start I was surprised the pace was so strong. A small group broke away early and I was sure they would be caught before the first climb at the 10km mark. I wish I had of been part of this group. Some of these lead riders took it easy up this climb and then jumped on the back of the main group as we came past. I found I was getting light headed at the pace I was climbing even though I was dropping off the first few riders. I have been doing some slow hill training as part of a bigger race plan but I was sure I should have felt better! At the top I had a bit of work to do to catch back across. There were a few strong boys on my tail but they seemed quite happy letting me drag them back up to the main group. At around the 30km mark I was comfortably controlling the pace on the front until Andy Blair moved past. Once this happened, the 2 remaining riders up the road were caught quickly. A group of 5 of us rolled through the 50km drink station together but in the next single track Andy flatted leaving just the 4 of us to battle through the last 40km. Shaun Lewis and I had a small gap after the 70km drink station and I was keen to try and put some time into the rest of the field. With his team mate off fixing a flat Shaun was quite happy to get towed around the rest of the course. At the 80km mark, Brendan Johnson and Michael Crosby caught us on one of the last big climbs of the day. Shaun once again had an easy day as the three of us took some turns out the front. With 10km to go Michael went back for a dropped drink bottle and left 3 of us to battle for the podium positions. At the 95km mark is a sandy crossing that I knew would help decide positions. I was on the front and took the left 4wd track down towards to water. Once you commit to a 4wd track in the deep sand you can't cross sides as you lose momentum and stop. Shaun sprinted across in front of me just as the sand was about to get deep to limit his losses if he couldn't make the crossing. A smart move but I managed to jump back across to the right side just as it got deep. I managed to make it across and had developed a small gap to the boys behind. I put the pace on and held back slightly to encourage Shaun to jump on the back. I had the thought the two of us could swap turns to stay away from 3rd and lock in the top 2 positions. Shaun's plan was to sit on and roll me on the line as I worked to keep Brendan at bay.
Still a fun day out and it was good hanging out with my Dad who raced the 50km and didn't do too bad at all for an old fella!