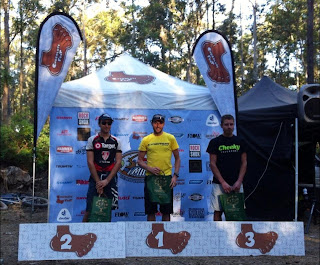 As an OnTheGo rider and being localish to Taree, the Chocolate Foot Single Track Minded Series held at  the Kiwarrak State Forest was a must-do event. My lead in to the race involved trying to sneak in a few holiday kms whilst still taking it easy enough to recover from the National Marathon Champs and taper for this longer event. I did this race unsupported along with most of the other solo riders. This meant I had to be super organised with drink bottles, gel flasks and bars. It also meant I wouldn't be getting splits to others riders so I just needed to do my own thing. 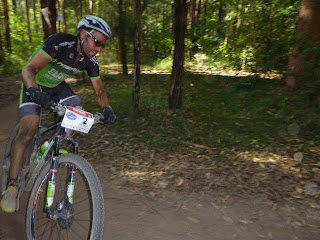 The race started at the bottom of a fire road climb which gave people a bit of sprinting time to see who hit the single track first. Ed McDonald was explaining how he had pulled up poorly from the Marathon Nationals before exploding off the start line and sneaking in front of me! He set the pace as a small group tried to keep with him. Ed got caught in some bunting part way through the first lap which gave me a chance to lead the charge. I found it very hard to get into a rhythm. I felt like I was riding really inefficiently. After three laps the top solo boys who were keeping the pressure on dropped off slightly. I then backed off the pace and really started to have some fun. I started to look further down the track so I could ride more efficiently. Looking around a corner can help decide how hard to hit the brakes and can assist in maintaining speed. 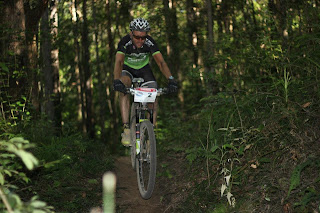 For the next 3 hours I just focused on riding efficiently as I started to maximise speed around blind corners and gullies. The Taree tracks really reward the efficient rider. The more you pedal, the more you have to break. The track almost forces you to find a happy medium. There aren't many places to put the power down and riding fast is all about maintaining speed over the course. It did take me a while to learn how to ride the 29er on single track but I am sold both on how good the bike performed but also on how good the trails are around Taree. The Merida big 9 is a great bike. A superlight bike is a big advantage when racing but the light weight Stans Race Gold wheels allow a greater benefit as the bigger wheels are easier to accelerate. 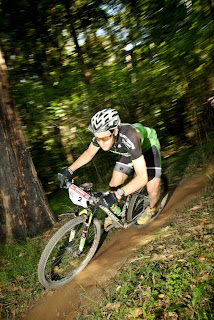 During the last 2 hours of the race I though I should start putting the pace back on as I was still feeling too fresh at this stage. I wasn't getting any lap splits to the overall positions but on my last lap I was catching a fairly fast rider who kept checking over his shoulder. I found myself a carrot and started to chase. In the last 1km I rolled past and apparently finished in front of all the teams. The top overall team ended up getting a time bonus for helping an injured rider so I slid back to second overall just ahead of Ed McDonald riding solo who came in 3rd overall. Maybe next round of the Chocolate Foot 7hr series a solo rider will win overall?