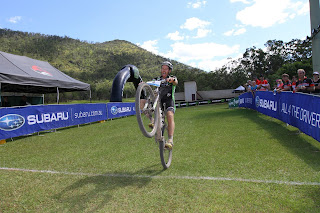 With so many races as options for this weekend and the logistics required to get to Atherton with a bike I was almost tempted to do an easier race. With a surprising result and feeling strong after racing the Wombat 100 I would have been silly not to make the effort. Logistics only became possible with the support and organisation of OnTheGo riders Jason McAvoy and Garry James who were also racing.

On arrival in Cairns we put off having lunch until we got to Atherton around 2pm. After food and rego there was time for a quick lap which we were all expecting to be super nasty from the feedback we were hearing. We had been warned that we would be riding part of the downhill track and that there would be a ridiculous amount of climbing. We only had time to see the first half of the track which kept us guessing what we were in for over the whole lap. 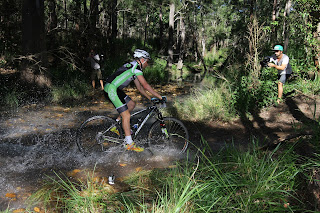 Knowing that it was going to be a hot day I got a super short hair cut and started drinking lots of Shotz electrolyte. Racing against the fast boys I have to look for ways to ensure my performance is consistent and not hampered by cramps or dehydration in the later stages. Drinking fluid not only in the morning of the event but starting the day before seems to be the trick. I did apologise to the boys I was staying with for the number of bathroom visits I made during the night. Drink bottles were also put in the freezer overnight to prevent hot bottles during the race. 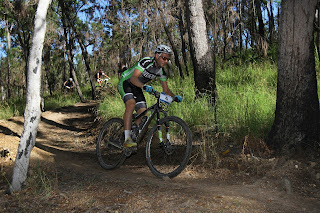 With a start on the front row my only race plan was to be in a good position leading into the first single track. I also didn't want to go too hard on the climbs as there were heaps of them. The race started as per normal at a stupid pace. I was struggling just to hold a wheel but I didn't want to get held up in the first single track. I must have snuck in around 7th. After a few mechanicals and minor crashes by other riders I had worked up to 4th. Before the first big fire road climb I was up to 2nd. By the top of this climb I was no longer in the top 10. I wasn't far away from the main pack however Andy Blair and Pete Hatton had a small gap on the rest of the field.

The back section of the course that I didn't pre-ride wasn't as bad as I had expected. There were some steep climbs that you really had to think about but the fire road downhills were quite straight forward. There were some fast descents which is where some serious time could of been made or lost. 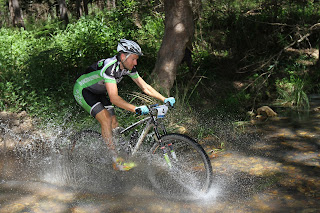 Over the last 10km of the first lap I had moved back up to a group of 4 riders and crossing over the line ahead of them had me in 5th position. It took around 1hr 48min for the first lap out of 3 and I started at this stage trying to calculate total ride time, amount of gels I would need to consume and how I was going to get enough fluid down. Our group at this stage I was around 2 mins behind the race leaders.

I jumped into the next single track first and started to wind up the pace a little. I started to put a gap into the group I was riding with and caught up to 4th place. I was starting to get some lap splits to AJ and Pete who were around 1.30 up the road. I managed to catch them half way through the lap and was informed Andy wasn't far up the road as I rode past. I was starting to get laps splits at this time that seemed to vary from 30 seconds to over 2 minutes. Heading out on my last lap I was 1.45 behind. At the 10km junction I was still 1.45 behind! With still 20km to go and another 600m of climbing I wasn't going to give up yet. I had my first glimpse of the leader up the main long fire road climb. I seemed to be catching him fairly quickly and I wasn't sure how much he had left in the tank. I was felling fairly good from taking a more conservative approach to the race and as I punched up some of the shorter steeper climbs I took the lead. I was a little torn between keeping sensible with my pace and trying to create a buffer. I opted to be fairly sensible, stopping for a final bottle with 13km to go and rode in a mostly controlled way down the final downhill to the finish. 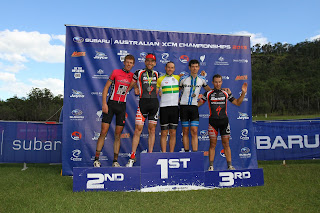 While I wasn't expecting to take the win it was great to back up from a couple of weeks racing to take two National Titles in three weeks.

I have heaps of people to thank for this race. Logistically it was quite tricky.

OnTheGo team mates Garry and Jason for putting up with me on the weekend. I'm grateful for you guys helping me get to the airport just in time...
I am really starting to enjoy my 29er, thanks Merida.
JetBlack's Stans Race Gold wheels saved some serious weight on the climbs. The Shotz electrolytes kept the cramps and bay and still taste good after being frozen! Pump n Pedal in Townsville for posting my bike back to Port Macquarie after it missed the plane...