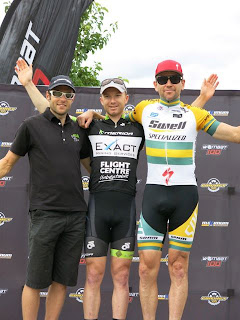 The Wombat 100 was a last minute decision for me to race. I was keen to do this race in preparation for the Marathon Championships and a chance to test out my new Merida Big 9 that only got its first ride on Thursday. After being picked up from Melbourne airport by Sam Chancellor it was time to check out some of the local trails http://app.strava.com/activities/48716076. If it wasn't challenging enough to learn how to ride a 29er on trails I didn't know, Sam decided it would be more entertaining to wait until it was dark! Fun trails and plenty of wildlife - wombats, kangeroos and an echidna. 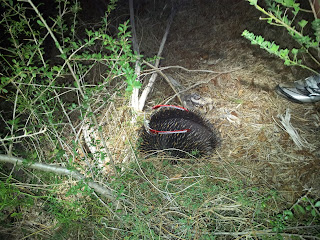 My alarm was set for 4.25am for the drive out on race day. Waking and glancing at 3.23am on my watch I thought I should get up as it was 2 mins before my alarm was due to go off. After getting changed and packing my bag I was half way through breakfast wondering why Sam wasn't up getting ready before I realised I woke up an hour early...

Rego was fast, I put my bottle in the drop boxes and it was time to get on the start line. I jumped on the back of the start group. I wasn't confidence of my ability to ride for 4hrs fast after focusing my training on 12hr and 24hr events. From the 40ish riders starting in the Elite category there were only a few that dropped off before we hit the first single track where I got caught last trying to get my heart rate monitor working. After a bit of battling to get through I had almost caught the top riders at the first drink station. They all rode through as I stopped to find my bottle and I slipped back out of the top 10. I kept sneaking past riders however the last 15km before the 50km feed was hard to overtake and the leaders had put in just over 2 minutes. 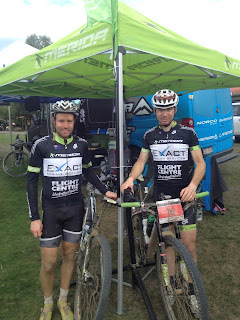 From the mid feed station I thought I would put the hammer down and see if I could make up some time. After around 10km I had caught the leaders and I moved to the front and kept the pace on. After 5-10mins of going pretty hard the top group was down to three with AJ and Andy Blair still with me. I kept the pace on for a while to see if we could keep a group however, with 25km to go the pace became more sensible. With 7km out from the finish I was on the front and took a wrong turn giving the boys about a 50m head start on me. AJ then attacked and worked for Andy to get away from me. I kept chasing and with about 5km to caught back up. With about 3km to go AJ attacked again and I got a tow behind Andy for a km as he chased hard. I went on the next climb, bridged across to AJ and sat on the front at 100% to get us away from Andy. AJ attacked on the last climb and I rolled over the line just after him for a pleasing result. Merida 1 and 2!

A big thanks to Sam Chancellor for being my taxi, showing me some of his cool training trails and sharing his roof.

Thanks Gordon Street Cycles for getting my bike built up a couple of days before the race so I had a chance to ride it. The bike worked perfectly!

Merida bikes for the Big 9 hardtail. I was excited to ride the big wheels before the race but I was loving how well the bike climbed and rolled. Once the bike was moving it didn't seem like a big effort to keep it rolling.

JetBlack products for the Race Gold Stans rims that are superlight and reliable.

Shotz Nutrition - the Shotz electrolyte tabs are magic for keeping cramps at bay and the caffeine gels are great for the last part of marathon races.

OnTheGo for the temporary race kit until I find some sponsors for this year!