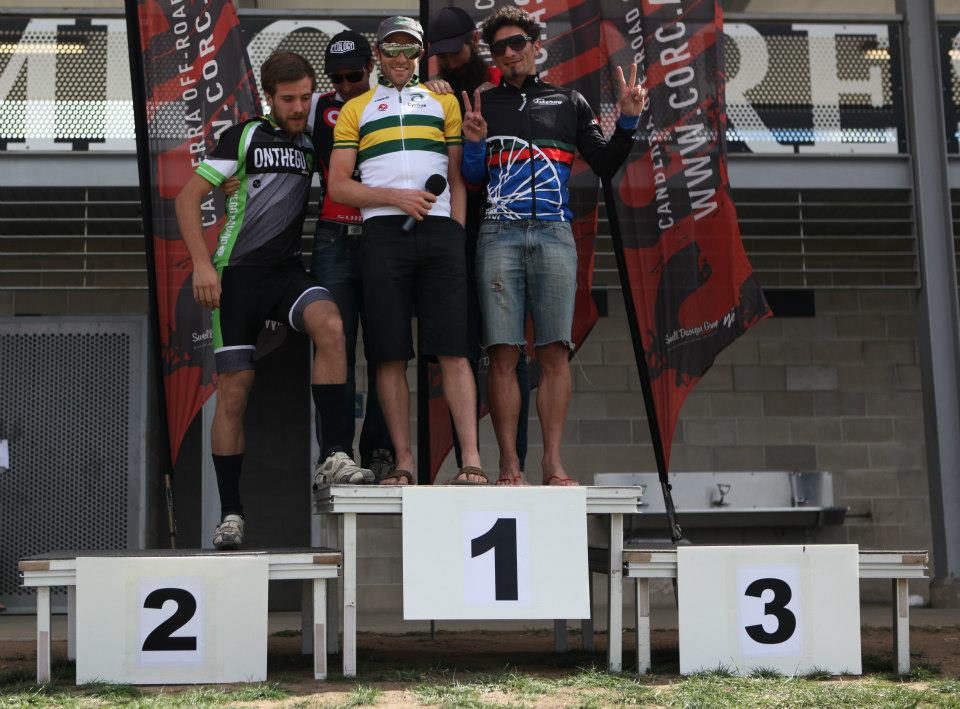 Three weeks before the 24hr Solo National Championships I was thinking my chances of racing were very slim. Even two weeks before I was in a situation where I couldn't lift my left arm above waist height. I was still able to train on the roadie but my training wasn't including my usual hill repeats that I slip into my regular training leading up to a 24hr.

There were some logistical issues as the race drew near with several phone calls and emails being sent and received to see if I could get two new bikes for the race. I had planned to start the trip south on Thursday afternoon at 3.30pm after school. With a change of cars at Gloucester, Jen, Archie and I would continue the trip to Sydney with my parents and arrive in Sydney at about 9:30pm. Due to the lack of bits and pieces to build up complete bikes, Darcy and Billy at Gordon Street Cycles were under pressure to get the bikes sorted in time and we ended up not leaving Port Macquarie until 7pm. We then didn't get to bed in Sydney 2am! Some people say the sleep two nights before an event is the most important but it is more important to have at least one bike that is in top race condition!

Friday was spent largely in a traffic jam south of Sydney before I arrived at Sportscare Physiotherapy O'Connor for a Retul bike fit. This was the best spent 3hrs of my preparation. I took down both my 909 Merida roadie and Merida 99 mountain bike for the occasion and I was impressed that the girls not only set me up on my bikes but, with a flexibility and strength assessment, suggested some strategies that I should employ so I can ride in a decent position.

Friday night was spent loading Shotz non caffeine gels into gel flasks and getting my lights sorted. The new NiteRider 3600 lumin lights are ridiculous. I use a reduced battery size and with the intensity that I run I get over 14hrs of battery life. The Minewt 750 pro on the helmet on the lowest setting is also sufficient for the speed I ride at. I don't know who needs to use these lights on full!

Race morning sleep in ended at 5:15am when my body told me it was time to get up. After eating a whole box of Crunchy Nut Cornflakes it was time to do a last minute shop for the race. A quick run through Coles had hot cross buns, pancakes, bread and a few spreads in the basket. With an assortments of Shotz bars to compliment the savory baked products it was time to rego and get ready to race. With my back up bike being my brothers I managed to sneak a quick service with Mick from ONYAbike which sorted a few serious issues. Thanks to OnTheGo racing my support crew had a sweet setup with heaters!

This was the first 24hr race that I haven't relied on a heart rate for monitoring pace. While this wasn't a planned move I was interested to see how I would go but the downside was I had no idea about the time of day. I purely had to eat to hunger levels and ride to how my legs were feeling. As the gun went I tried to stay with the fast boys. I couldn't. I kept thinking it was the new bike setup and I was convinced I needed to drop my seat a little. Once we got to 'the hill' out the back I waved good bye to three or four riders as I kept to my own pace. Heading down the final decent was great. There were some familiar tracks until I hit the lower section where there was just 'choose your own adventure' lines everywhere. I was dodging gap jumps and anything that may have caused a slight jarring on my sensitive shoulder.

After the second lap I was already down a few minutes and I wasn't looking forward to the final downhill. I was sure there must have been a quick line but I couldn't find it. At the end of this lap I was almost down five minutes. I was starting to calculate how long it would take the boys to lap me as I worked out how many Shotz gels I should be consuming each lap. I spent a couple of laps riding around with Scott Chancellor before evening who was sitting in third place. He had a 29er duallie and seemed to make rolling over anything look simple. Eventually I found a fast line down the last part of the downhill and I was starting to feel good on the new bike.

I was still riding quite conservatively up until night. My goal was purely to not fall off. I knew one small impact on my left arm or shoulder would have meant an instant DNF. Once the lights were on and I felt I got to know the track I held back on the brakes a little. I started to have a really good time. The savoury pizza came out for a few laps (which apparently has been restricted to three slices) and it was time for 80mg of caffeine delivered through Shotz wild bean gels. I was getting the splits as I started to catch Ed Mcdonald during the night and when I caught him I thought he was done. He didn't look comfortable on the bike and I seemed to catch him fast. We rode together for a little while however I found I was riding by myself as I tried to keep a consistent tempo.

With my pocket full of wild bean gels any feeling of tiredness either sleep or energy related was kept at bay. I lost count but I think 9-10 gels kept me feeling great all night. Normally I am hanging for the night to end and the tiredness to stop but that wasn't the case at all. I'm sure I am onto a good formula with these gels. As the morning did finally come around and I had some serious battery life left it was time to play around with 3600 lumins. These lights are brighter than my car headlights!

I was starting to get some splits back to Ed as the sun rose. My lead went from 5 minutes to 3 minutes to 90 seconds. I wasn't planning anything silly and I was happy to accept Ed as the stronger rider if he could maintain his pace. I wasn't going to give up easily but I didn't rate my legs on the back hill so I tried not to go too much faster. I have seen Ed in the past have a last final crack pushing himself into the red zone and I was hoping this was the case. Getting lap splits closer to 11am and I could see I was actually moving faster than him again and it was time to calculate how many laps were left. I was pretty stoked to have Andrew Hall (racing in the 6+6) catch up for the last couple of laps to share some trail with. Times really don't indicate how close Ed came to finishing ahead during this race. I was really keen for the green and gold jersey this year. I didn't think it was going to be possible but I am pretty excited about getting to wear the championship jersey to the World Champs in Canberra later this year.

A big thanks goes out to the following people for getting my 2013 season sorted:

Darcy, Billy and Lloyd from Gordon Street Cycles for making sure I had bikes for the race

Jen for managing the pits with my parents and brother Mat

JetBlack Products for getting me on the NiteRider 3600 and Minewt 750 pro, Stans Wheels and Crank Bros products

Shimano for their support and drivetrain that ran great. XTR brakes are fantastic!

Shotz Nutrition that has the perfect recipe for 24hr racing

OnTheGo racing for their new kit and race team concept

Adidas Eyewear for the Supernova series