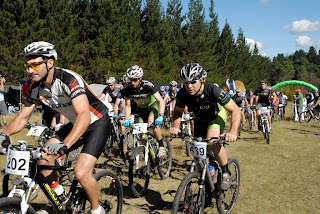 After having a serious road crash and suspected broken collarbone only 2 weeks earlier, the chance of doing the Armidale 12hr was quite slim. Even the week before the event I couldn't lift my arm above waist height and with no new bikes from Merida I was sure I couldn't race even if I was race fit. A Friday appointment with the doctor for a last minute review of an ultrasound indicated swelling on my shoulder joint but with nothing broken. It was time to start carb loading less than 24hrs before the event. I am grateful I had access to my mum's mountain bike and a 3hr trip out in the morning had me on the start line almost on time!

My mum's bike was a real bitza. It had old Rockshox forks, Shimano cranks and a Merida 99 frame but I managed to put quality Stans Podium wheels on which were running continental x-king tyres front and back for a change. The extra grip on the back was great for trying to stay in control over 'the rock' and for traction up some of the pinchy climbs.

I went into the race knowing I would be self-feeding so I had a table set out with everything I needed. My spare helmet and clear glasses were ready for the night. There were preloaded zip bags full of either sangers, hot cross buns or scones, preloaded Shotz gel flasks and bottles that were colour coordinated based on if they were loaded with Shotz electrolyte tabs or just water. 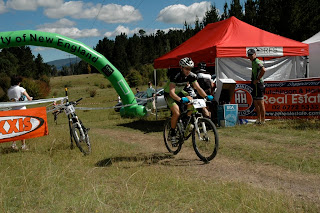 This race was the first attempt I have had off road so I started the race slow expecting to be troubled by my shoulder. After the second lap I was aiming to complete only one more lap as the pain was building however, that was the last time I really considered my shoulder as an issue. I started to get off the brakes down the flowy downhills and started hitting all the 'a lines' over doubles and down steep descents. As I started to catch up to the lead solo riders I also found a couple of team riders that were keen for the overall win. 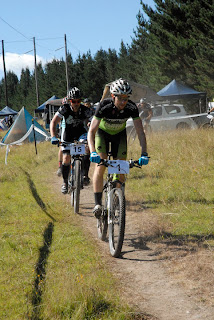 The track had a variety of different sections, there were really rough sections where cattle had walked on the tracks in the mud, there were super smooth flowy sections through pine forests, there were bridges, pinch climbs that were barely ridable, double jumps and a downhill that kept you thinking each lap. The track was taxing. There wasn't a lot of climbing, over the whole race I climbed just over 2500vm which is nothing for a 12hr event but it was a challenge and not many solo riders, including myself stayed on the track after 12hrs!

Having a 12hr start at 10am is a great idea. It meant I had time to travel to Armidale before the race started in the morning but it also means you still have a few hours of night time riding. I didn't quite get my new lights programmed in but I will be running my new NiteRider 3600 lumen lights next week for the 24 hour solo nationals!

During the last 3-4hrs of the event, my biceps were really starting to hurt. I was almost vocalising this discomfort as I was hammering the downhills. I was convinced this was due to my lack of upper body strength from not riding off road but after the race it was clear my forks needed some serious rebuilding! 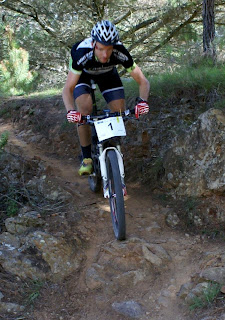 I was so glad I did this race firstly to prove that my shoulder is still ok for the 24 hour solo nationals but also as it great racing with quite a few local guys in a relaxed environment on an interesting track. Next year the team riders should beat me!

A big thanks firstly to Gordon Street Cycles for getting my mum's bike in a condition to race for 12hrs. They have been putting in lots of after-hours time to get my bikes sorted.

Thanks Continental for the x-king protection, super strong, fast and grippy. I think I might try this combo again soon!

Shotz Nutrition have always been reliable and I am glad they have agreed to support me for another year.

The Armidale club also did a great job of putting together an interesting track. Next year I will be back with bigger wheels!