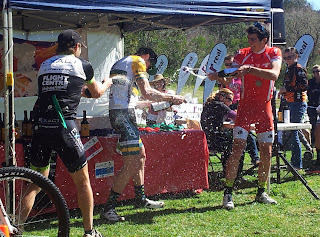 The closest XCM series race is also right near family so I was keen to check out the Woolombi marathon. With speculation posted on Facebook and Twitter I was visualising a race that started and finished in a vineyard after riding around grass paddocks.

The race started with 2 degrees on the Garmin. It was freezing! It took ages for my legs to get use to operating at such a cold temperature and attacks were starting right from the gun. It was hard to predict how this race was going to unfold. I was expecting a gun roadie to take the win.

The decisive move made during this race occurred at the KOM. I'm not after the points so I wasn't too stressed about getting up the hill quickly. I thought it was only Andy Blair up the road for the climbing points so I decided to let him go knowing a large group will always catch a lone rider.
After some casual riding it became clear that Andy and Trenton Day were up the road and no-one was really interested in working to change that. I eventually got on the front and set a solid pace I felt I could maintain. As I started to feel good I followed a nice big black arrow that ended up taking a small group of us to bush toilets. After a bit of confusion we backtracked and with directions from a mobile marshal we were back in the right direction. The course we were racing on is almost a straight out and back. When we hit the turn around I was in the front 3 riders and we could see the lead boy 4-5mins in front of us. We worked quite solid to get a gap on the rest of the field. When it became obvious that only 2 out of the 3 of us were keen to set the pace a few efforts were made which resulted in just 2 of us swapping off to the finish for 3rd and 4th. I think next race I'll make an effort on the KOM to be part of the race.