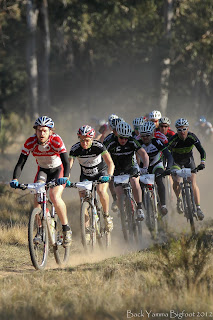 I had the NSW Merida rep invite me to do the Back Yamma Big Foot in 2011. A 10 hr road trip each way to race on the same weekend as local races meant it was an easy decision to skip this event. The opportunity came up again this year. As it turned out I was already travelling around after being at the 2013 Merida product launch. Instead of returning straight home I took a detour via Parkes and had the opportunity to hang out with quite a few regulars in preparation for the event. I'm still regretting the missed chance to indulge in Pizza Hut buffet...

The Sunday morning start didn't seem as bad as the weather man had forecast. After racing in 2 degrees at Woolombi, then riding in the 30 degree heat around Brisbane it still had a little chill. On the start line there were a few riders I haven't seen for a while. Former BMC team mates Brian Price and Andrew Lumley. From the start I felt like I had the pace wound up until Big Dog (Brian) smashed past me which made me thankful for the 42 front chaining on the 29er! At the pace he was driving it was going to be a quick race. As he backed off briefly a crazy man with a massive beard on a single speed road past the top group of 10 of us and made a gap off the front. I have seen the tactic before, I'm sure it was all bluff. What could a single speed rider do when compared to a big group working on the fireroads at 40km/hr? Apparently the Back Yamma is very single speed friendly, with its lack of hill and flowy trails it didn't require the usual downshift before a corner. The track was made up of two 50km loops and with 40km into the race Brett Bellchambers on his SS was out of sight. I was happy sitting on the back and not trying to work too hard when I stick creature whacked me just under the patella. I was pretty much disable in my right leg. I could only pedal with my left leg and my race plan seemed to go out the window. I had the plan to hit it hard in every single track in the second loop. I was now questioning if I would finish. After 5-10mins I felt I could start to pedal again but without much power. I managed to catch back up to the group again but knew I wouldn't have anything at the end for a sprint.

With Bell Chambers still off the front it was Andrew Hall who found his groove and worked solid to bring the group back together. At the start of the second lap in the first single track I found a little A line jump and made a little gap on the rest of the group. When I hit the next fireroad I thought I would put some power down, test out my knee and see who was keen to chase. I could see Lumley 10 seconds behind me who had another 10 seconds on the rest of the group. I sat up slightly to see if he would bridge across but I didn't want the chasing group to get too close and I decided to just keep pushing on. With my seat another 10mm higher I'm really enjoying the 29er it carries its speed so much better than a 26er through rough terrain but also around corners due to this increased grip. It was hard to get feedback on the gap I had to the boys behind so I just keep the power down knowing that most likely they will be working together to chase me down. I couldn't believe the pace I could maintain on the big wheels. For the last 10km of the race I kept looking around to see if I could see the chase group but they weren't to be seen and I managed to escape over the line in front!

It was great to win at a race that has so many of my sponsors.

Merida were there as a major sponsor and they are the only reason I could get to this race. It was a great event, solid competition, super fast and flowy trails I'm hoping to be back next year.

Continental tyres were also throwing around quite a few tyres. I'm glad these guys have now embraced the 29er fad with their 'Protection' and 'Race Sport' series available in both the X-King and Race King tyres that I run.

It was another event for Shotz nutrition also. I wouldn't know how to race without their tabs in my bottle and caffeine for the last hour kick.

JetBlack were also supporting the event and I was grateful for the Stans Race Gold Wheelset out on course. They seem strong even when they get drifted and high sided not to mention the weight saving which takes lots of effort out of acceleration.