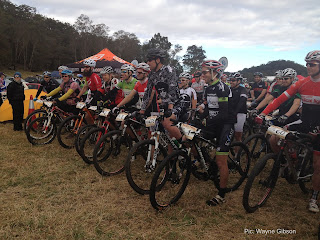 I had so many reasons to make sure the JetBlack Sydney 12hr was on my calendar. It is a great chance to show off some of the bling that JetBlack have put on my bikes. It is a great chance to catch up with mates. It's a good excuse to get some kms in not far from the 24hrs of Adrenaline World Champs and Rocky Trail Entertainment always seem to have a good vibe at their events.

After a full GSC service on both the Merida 99 and Big 9 it was time to hit the road after work on Friday for the 5hr trip down. After an hour of driving I was convinced the race wouldn't be on as the poor visibility forced me to a crawl. When I arrived at the race venue I had two pleaseant surprises. The ground was dry and, equally as exciting, I had a piece of caravan to sleep in.

I was amazed how mild the morning was as I casually got ready for racing. With less than a minute before race start the guys from JetBlack were finishing off my Egg Beater pedal spa. Their support has been great!

The start line looked impressive with around 100 of the 300 riders on their bikes for the first lap. I was lucky to be called to the front but I wasn't keen to match it with the speed off the blocks. I must have slipped back to 20th and was prepared to not see the front solo riders for a few laps. As it happened the pace only lasted a few kms before the top 3 team riders got away and the rest of the field sat up. I managed to get back onto the pace line which eventually was driven by Andy Hall. Andy didn't slow down and kept a pace that had what was left of the pace line averaging over 22km/hr which is pretty quick for a 12hr. After being off the bike for most of the week to prevent a threatening illness I wan't sure I could maintain his pace.

I had decided and let Andy know that when the Bernard Beer Boys lapped us that we should sit on the back of them for as long as possible before disintegrating into a dribbling mess. The plan sounded simple enough and I was sure Andy would be up for some craziness. When the chance came he wasn't. I knew I was going to be in trouble when the 28min laps became 24-25min laps but it was sort of fun while it lasted. After 2.5hrs I knew it was time to back off. I'm not sure I backed off early enough. It took a few hours before I started to feel good again as I started counting down the laps with about 9 to go.

The track at Dargle Farm is set up so that it is mostly flat with 1 solid and 1 steep climb each lap. Each take a few minutes to negotiate. Being busted on this track doesn't mean race over. The 2 direction headwind wasn't all that fun but it was easy to just keep ticking the pedals over. The last lap I got news that Andy was a fair way back. I made the most of the gap and enjoyed the walk up the steep and nasty final climb!

I had the plan to try and stay on my 29er hardtail for as long as possible during this race as I'm still deciding what bike to take to Canada. The 29er hardtail / 26er duallie seems to be a popular option during 24hr races and with only a few weeks until the the 24hrs of Adrenaline World Championships this was a great chance. While the 29er felt fast and would soak up the smaller bumps, the 26er still climbed well even setup really soft. I'll be taking two 26" duallies to Canada!

A big thanks to the boys from GSC who worked hard to ensure my hardtail was available to try out for this race. It was great to have the mechanical support and new toys form JetBlack and thanks again to Rocky Trail Entertainment for the fun environment and the recovery pies!