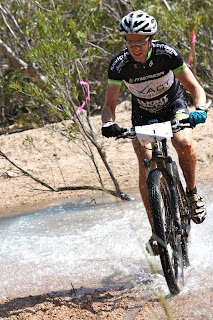 The Paluma Push is an event I have only heard good things about. I hadn't researched the possibility of doing the race. When I consider how many other events are already on my calender and the logistics of flying and travelling to the start it's all too hard. That was until I had a conversation with Peter Lister at the Mountains to Beach stage race earlier this year. He had the idea of gathering local support from the Mackay/Townsville areas to assist in getting me to the race. The deal included was the awesome opportunity to speak at several community events and assist with some skill clinics.

When doing a race report that focuses on the Paluma Push it's hard to not mention the great time I had up in Northern Queensland and I hope it is the beginning of some relationships that will continue. This was my first race on my Big 9 Merida 29" bike and I was interested to give the 29er a go. I have been a bit sceptical but I wasn't going to make a judgement until I gave it a good go. It had been blinged out with support from Sram decking it out with X0 and Jet Black Products coming on board with the Stans Race Gold rims and Crank Bros parts that have made this bike super light. Darcy from Gordon Street Cycles build it from the ground up and I appreciate the time he put into it. I had got to ride it a few times out at the Mackay (MAD) mountain bike trails as part of some skills days but it's hard to know how a bike goes until you really race it.

The night before the event I was still playing around with the tyres trying to get the non tubeless tyres to seal. On the 26" bike I have my combination sorted and I wouldn't change the matching of a protection tyre on the back and a light weight race sport tyre on the front. The only option I had was standard tyres that were so thin the sidewalls were barely sealing at all. On race morning I decided not to put tubes in but to see how the bike would go in a tubeless setup regardless. I did carry 2 spare tubes and extra canisters in anticipation of issues. In hindsight I should have just put the tubes in.

The race started at a sensible pace until a quad bike doing some film work made a good target to draft behind. Sucking wheel behind this machine at 180bpm meant the boys in my draft were also suffering. I eventually cracked and sat up as a few attacks went off the front. I wasn't chasing anything at this stage as I had heard there was 16km of fireroad before the trails got narly. I had been warned about the first big climb at 14km and I just wanted to stay near the top few guys at this stage. I was surprised how many people were still together at this stage of the race. There was only 1 rider off the front as we moved into the first technical loop of the race. This was an extra loop that only the competition riders got to experience. I made sure I was at the front in this section. I really got to try out the 29er in this section. When I caught up to the rider who was off the front I actually felt sorry for him. He was working hard on his 26" hardtail as my 29er rolled through the gullies ignoring roots and erosion that were running out of control all over this part of the track. I'm not sure if it was purely the larger footprint or the fact my tyre was running about 15psi but I didn't need to think at all as I rolled over the rough terrain. As my rim made contact with some of the larger roots it was time to give my tyre its first CO2 injection. The second hit was given once we rejoined the track with the recreational riders and the tyre change was administered another 5km past this point. Once the tyre was removed it was obvious that water had just poured into the side of the porous tyre and encouraged the air to escape. Sliding back to around 10th place and 5-6mins down on the leaders at this stage I was convinced my podium chance was gone. In a 65km race lasting less than 3hrs it was now time to just see who I could catch. Not long chasing I caught back up to 7th place. At around the 40km mark where the competition riders completed another additional loop I could see 3rd to 6th place riding together. I rode past them feeling quite strong. Getting feedback I was 4mins from 1st and not far from second I set the closer target as my goal and kept pushing hard. I got a little carried away as I rode past second and crashed quite hard overtaking a recreational rider. Riding the last 15km was a challenge as my bars were quite crooked however I couldn't afford to stop as I got sight of the first rider. With 10km to go I managed to sneak past on one of the final climbs. With a caffeine gel it was all go to the finish line through a super fast and fun final 7km. What a great way to finish a tough little race.

It was great to experience the Paluma Push, I would like to do it again with my usual protection race sport tyre combination! Jen and Archie also had a great time which is very important as we got shouted some lovely accommodation at the finish in Hidden Valley courtesy of Corry Cycles.