The Armidale 12hr was a perfect fit for my calender leading up to the 24hr Solo Nationals at Easter. I have been fairly consistent with my training and with constant changes happening with my bikes I was keen to see how the new setup would go. 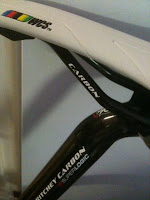 Two weeks ago I put new egg beater 11 pedals on my bikes. Last week the new Ritchey superlogic components arrived. The seat is a carbon rail 135gram seat that still had enough padding to be comfy over 12hrs! The bike is almost setup how I will run it for most of the year which, at 9.6kg including pedals and "protection" tyres, is not bad for dual suspension bike!

I had the intention of starting the race on the hardtail and moving onto the dually as the race went on. This plan was thrown out the window as I discovered I had left my shoes back in Port Macquarie and had to rely on phone calls to get a set of shoes and pedals before the race start.

I hadn't ridden the dually at all since the Sydney 24hr and with the new setup including shoes etc I found it took me ages to work out how to ride the bike. I changed to clear lenses so I could see in the dark pine forest but it took around 2hrs until I finally felt like I was racing when a team rider came flying past me. It just gave me that kick into gear and it was on!

The bike started to feel great, it was handling the downhills easily and climbing was a joke on such a lightweight machine. At about 3hrs I checked my average speed and I was sitting around 20km/hr which could get me close to 250km if I got in a sneaky lap at the end. Then all of a sudden I couldn't pedal, my front derailleur had dropped down into my front chain ring so the cranks wouldn't turn. Good thing I was only a 1km away from the finish to borrow a torque key.

Back on the bike again and I had no idea how I was for position as there were no live updates so I just kept hanging out to see if Jen could find out anything. I was starting to enjoy the track by around the 4hr mark as I worked out what lines to take and where all the muddy corners were hiding. The track started with a pine forest and followed the gradient of the hill for most of this section so it was super smooth and fast. The trail then headed across a paddock and into a series of switch back climbs and downhills. The whole track seemed to follow contours rather than force steep climbs. The back section was quite rocky and offered a series of A and B line options which was great to have some sections to think about. These A lines included steeper descents and narrow log rides to save time.

By the time the sun went down I had a few laps up on second place in the solo category however, there was only one team 9 minutes ahead. With 4 hours to go and under 30min laps I had to ride at least a minute quicker per lap. I was hoping with my lights and experience in the dark I could make up some time but I kept getting the same feedback "5 mins up the road". With 3 laps to go I was pretty tired and busted so I took a couple of Shotz caffeine gels and was happy to struggle home. The gels did the job and I actually came good but with a 5 minute gap I didn't have the legs. Coming across the line I had 248km on the Garmin which is a massive PB for me and the results showed I finished 15mins up on the first team?

I'm now hanging out for the Port Macquarie 12 hour next weekend to see if 250km can be hit especially if I have 2 bikes to play with!

I'll post a pic up of my 3 bikes when all the parts come in to build them up!

Thanks NEMTB club for the event, Mark for the pedals and Scotties parents of the serious carbloading fest.