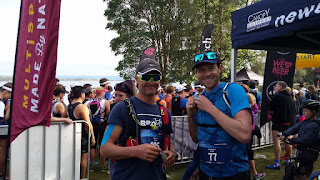 I have always wondered how I would go as a runner. I have done 4 Parkruns and at each felt I have gone ok. I got roped into the Geoquest Adventure Race a few weeks ago and part of the training involved a few 5-10km runs. With these few runs and the adventure race, I felt if I could put together a few 20km runs then I would give the 35km trail run a go. I worked out I could run 20km in around 2 hours so when I lined up for the Raferty's self seeding start, I put myself in around 40th as I was aiming for a 3.5hr run.

On the start line I was feeling a little under prepared. I had grabbed the smallest Camelbak I could find in my shed. This became a problem as the only storage was on the very back and I couldn't access the food I was carrying without stopping. It appears running Camelbaks have storage pockets on the front. This Camelbak also didn't have a chest strap so it jumped around as it pleased. The only GPS I own is my bike computer which I started and threw in the Camelbak as I couldn't get my smart watch working so went watch free.

From the start I was just on a mission to catch up to Paul Perry who had convinced me to give running a go. There were quite a few single tracks early on which explained the wave starts. I had caught Paul after a few kms and I continued on the same pace as I felt pretty good. I was actually passing lots of people and was getting a sense of achievement with each person I ran past. Around the 10km mark after passing a photographer I was informed I was sitting in 4th place. At this point I knew I was probably going too hard however, I wasn't sure what pace I should have been aiming for. I had no idea how far I had run and as I couldn't see my heart rate I couldn't see how hard I was going. 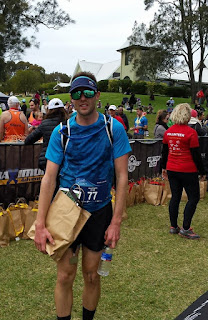 From this  point the course followed the beach and I could see the top 3 runners up ahead. I was going in with an aim for top 10 and sub 3.5hrs so I had no interest in going after them! I tried to sit in a comfortable pace and at this stage was feeling pretty good. At each check point I stopped to grab a stack of lollies. I honestly didn't consider that other people would also need them during the race however, getting my gel flask out often resulted in dropping my Camelbak or falling over!

I possibly should have looked at the course profile or map because as I reached the turn around I became very confused. The marshals told me I just needed to run back the same way. I actually asked if they were sure about those instructions as I felt I had already run what felt like 30km. This is where I began to realise how tough this run was really going to be.

Heading down to the long beach section (this time in the other direction) with around 12km to go I could see a few runners up the beach. I was still feeling good until the end of this section. At the checkpoint with 9km to go I knew I was in trouble. I took on heaps of lollies to avoid accessing my gel flask and began the last part of the run. This part now had the 20km runners also. Running past people this time didn't provide much of a boost, I was purely just trying to get home. With 3km to go I had run out of electrolyte and at the 2km checkpoint I stopped to take on water. The last 2kms were quite interesting. I started to feel quite sick and my breathing became super heavy. I put the sickness down to the ridiculous amount of lollies I took down at each check point but I couldn't understand the breathing. I had really backed the pace off, it felt like my heart rate had lowered however, I was still puffing my guts out. I can only put it down to the amount of pain I was starting to experience. Coming across the line I could barely hold my finishers bag as I almost fell into the cold lake for some serious recovery time.

I have a new level of respect for the guys that can do an event like this and walk comfortably the next day. 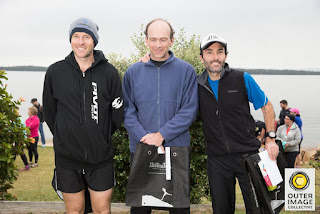 A big thanks to Jen for driving me to the race and looking after the kids.
Maximum Adventure for putting on such a great event.


Paul Perry and Michael Percival for the encouragement to give running a go.