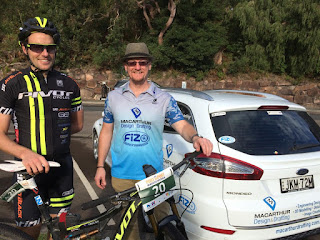 After doing the Cape to Cape in Western Australia and loving it, I was pretty excited to grab a Camelbak sponsored entry into the Port to Port which is run by the same company. The Port to Port is a 4 day stage race located around the Newcastle area which is less than a 3hr drive from home. With family offering a place to stay, my dad also entered himself into the Thursday and Friday stages. 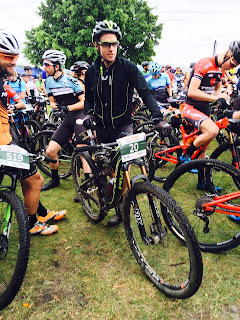 It was freezing on the the start line before day 1. With jackets being put on and off as riders waited for the course to be open it felt like winter had come. A ridiculously slow pace car seemed to be a bit of a common theme for the week. My thoughts of being cold quickly disappeared after this car left and I was dropped off the front group on the first sandy climb. This first day, while short, had quite a few challenging sections that I thought would have sorted out the field a little more. After the first sandy fireroad section, there was a 2km road section that allowed a group of 20-30 riders to form before the track turned bush again. The second part of the first day was mostly fireroad. This included a section called the three bears. There was talk about this trail being un-rideable and my legs were already fried before we hit the first one. I somehow managed to run myself up to the top few riders and by the end of the last piece of fireroad I had managed to hang onto the lead 4 riders. We swapped off where we could to try and make a little gap. With a surprise sprint before the final single track I managed to get in last and hold my 5th position to the line. While I wouldn't take my mountain bike to Port Stephens to re-ride the same trails, I think the course designed was a great challenge and worth putting in a stage race. I managed to grab some personal bests in this stage for sustaining such a high heart rate for such a long period of time. 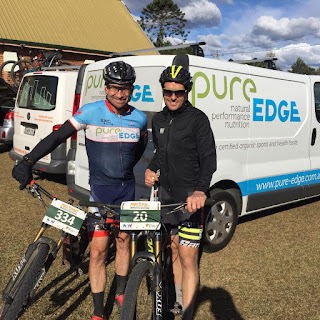 I was pretty stoked to have Jason Moxham around after the first day for a quick bike service. The other guy that was great to find was Matt Russell from Pure Edge. Stage racing is all about recovering quickly to prepare the body for the next race. The best way to recover I have found is through liquid foods that are quickly absorbed. It's hard to pack a good meal to have ready at the end of a stage, but it is easy to pack some Pure Edge Superfood and Pure Native WPI.

This was always going to be a tough day. The stage started with a gravel 400vm climb and it was game on once the lead car snuck away. I managed to hang onto the second group up the climb as I thought this bunch had enough firepower to have a chance at chasing the lead guys. Once up the first big climb there was a series of undulations as the road continued to mostly head up. As we approached the first single track, I moved into a good position only to have my chain sneak out around my chain guide. Once off, the chain put up a good fight before I could wrestle it back on. With 30 guys now past me into the single track, I had a bit of a task to catch up to the guys in front. The single track was surprisingly fun and "Down the rabbit hole" was challenging as not being able to see over the water bars made picking a speed fun. Luckily I managed to sneak past a couple of riders down this section of track including Chris Aiken and we swapped off for the rest of the stage. 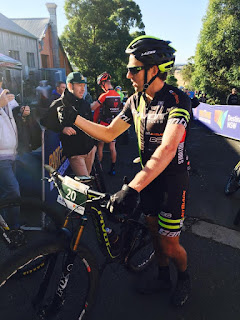 I was looking forward to this stage the most. Being the longest of them all at 65km, I was hoping my endurance would almost assist me against the short distance specialists that I was racing. After a long lead-out from the pace car the race started not far from the entrance to the Awaba MTB Park. I managed to hit top 10 leading into the first single track and was close to 5th wheel at the end of the single track as the big climb of the day started. With my front lockout still on I started the climb with Chris Aiken, Shaun Lewis, Rohin Adams and Marc Williams. We worked together across the top of the course through a variety of single track and open firetrails. With 10km to go I moved to the front and upped the pace to see if we could catch any riders ahead and to see how fresh the other guys were. After a few kms of going quite hard the noise of the other riders seemed to fade off. I just kept my head down until Tristan Ward who claimed to be in second, merged onto my path. Asking him if he went the wrong way I was left knowing one of us had. He reassured me that with Strava it would be easy to see how much time was lost or cut and things could be worked out later. I followed Tristan in and 5 minutes later the guys I had been riding with came across the line, just after a group of 10 riders came through that took a 10-15min short cut. Using Strava to calculate segment lengths, it could be seen the segment I took was 53 seconds long and the elite guys were doing the longer segment in under 4mins. The race organisors decided that instead of a 3min 7sec addition to my time, or instead of giving me the same time as the guys I was riding with earlier on, I should have a time penalty awarded as I apparently choose to take the shorter option! I was confident there was no signs to mark a corner. Anyway, by the looks of Strava Flyby it would seem I wasn't the only one who should have got a time penalty! 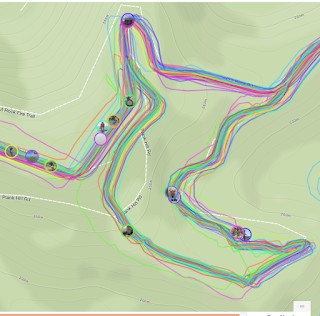 I didn't really feel like starting the last day. I had the intension to try and race for top 5 on GC but now sitting in 7th with almost a 3 min gap on 6th I would have needed to find something special for the final day. With a shortish 50km day with neutral zones and cycle path it was going to be a fast and hard race. From the gun it was on. Kyle hit the first climb like it was a 5min race and didn't back the pace off. I quickly went from a 3 or 4th to just hanging onto top 10 as the steep early climbs smashed me. With a few technical ups and downs early on some of the elite riders were having offs and I was pretty keen to look after myself! By the neutral zone a top group of 6-7 guys had gained a 2 minute lead. As my group restarted the lead group rejoined us as they went exploring around the golf course. As we hit the cycle way the pace was usually around 40km/hr with some significant surges in pace. One of these must have occurred in the bottle drop as I didn't see the drink truck the whole race! While most of the elite guys were getting past bottles I had no water for quite a large part of the race. As the cramps started, I was passed a half bottle from a spectator as I started to catch up to 3rd and 4th. Heading up the last climb I had to let them go as the cramps were killing me, another bottle with 3km to go was a little too late but still needed to get home! I'm grateful to those guys for the bottles! Sneaking across the line I was in 5th on the day but with a time penalty, missed 5th on GC by 7 seconds! 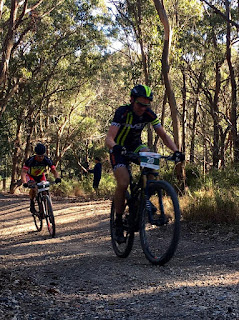 At the end of the day the Port to Port is a great race. I'm not a cheat and I'm upset that some people think I am. I'll aim to be back next year, hopefully with some climbing legs. I think I would hold back a little more on the first day to save my legs for the longer stages. Hopefully I can convince my dad to do the whole 4 stages next time!
I have heaps of people to thank so I could do this race:

Camelbak for the entry
JetBlack and Pivot bikes for the Mach 428SL - It was great. After an adjustment of the front chain guide the XTR worked a treat.
Shimano for supporting this event.
All the Newy locals for yelling at me passing random bottles on the last day!
Pure Edge for the recovery products each day.
Paula Gresham for the lift out on day 3
Jason Moxham for the service after day 1
My Dad for coming out and having a race


Jen's parents for helping with the kids (again!)