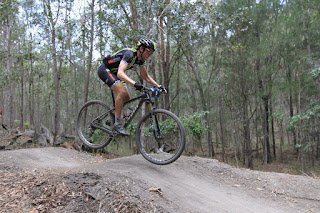 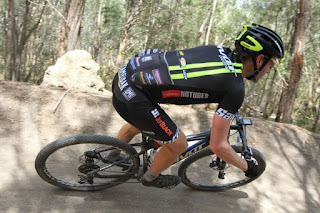 I was planning on winding down the amount of racing and time away after the World and National 24 Hour events. That was until a surprise 2nd place at the Kowaski earned me enough points in the series to potentially hit top 3 if I placed well at the Bayview Blast. I was already up in Coffs Harbour for HSC marking which meant only 4.5hrs further to the race. 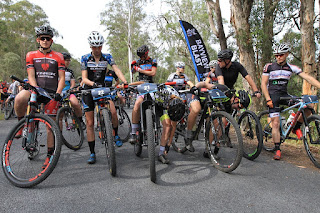 My brother really promoted the area as some of his favourite trails to ride in the Brisbane area so I was really keen to see them myself. With a fairly warm day forecast, I made the most of hydrating well and used it as an excuse to add some extra salt to everything I ate on Saturday.

I had planed to ride the first lap with a camera on my helmet, but it just kept slipping so I left it trackside 5min into the race. From the start a group of 5 riders formed and we all seemed to take turns with the pace setting out the front. I had a little mechanical issues on the first lap which held me up a couple of minutes. I caught back up to the chase group consisting of the second to forth place riders by the end of the lap 1 before having the same issue to attend to at the start of lap 2. As I caught this same group of  riders again, my seat decided to eject. I was pretty glad I had a multitool with me and was able to source the various puzzle pieces that jumped off in all directions. I'm surprised the seat wanted to leave me as I hadn't touched the position since California and since it has experienced at least 30 hours of racing! I found the task of putting the seat back on quite challenging. In a workshop the seat is hard enough to put back on but combined with sweat dripping everywhere and race high adrenaline, I had to just stop and calm down before I even attempted the procedure. With a seat back on, and possibly tighter than what it should be done up, I tried to crank up the pace a little. I was feeling great, I not sure if it was from a few big weeks of racing but I really started looking for places where I could put the power down. The course had so much single track that didn't require pedaling that when there was a chance I went for it. This seemed to work really well for me, and by the start of the last lap I had caught up from 15th place when I lost me seat to Eythan Kelly who was sitting in second. As I went past him I was still feeling pretty good until half way through the last lap. I had consumed both of my drink bottles and was starting to get some little twinges. I decided to back off the pace, increase the cadence when climbing and just looked to defend second place. I clearly didn't drink enough from the start. I should have been going 2 bottles of electrolyte each lap rather than just trying to play catchup on the last couple of laps. 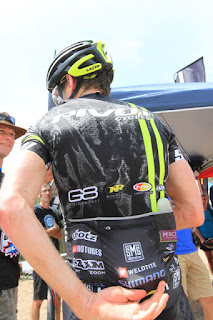 I really need to thank Mike Blewitt who managed to source a couple more bottle for me so I could run two each lap for the last two laps and Jamie Vogele who helped share the driving on the way up and back. Also thanks to my brother for letting us crash at his house and the local club for putting on such a cool event. I'll be subscribing to the club website to see if I can make it to future events. The trails have lots of variety that range from burmed up super fun sections, include high speed no brake flowy corners as well as tight twisty sections that have almost inspired me to cut my bars down!

Did I mention it was hot?

Thanks Russ Baker for the pics :)