With the closest round of the Evocites on the same weekend as the Convict / National XCM Series race, it was a tough call which race to contest. I really needed the Convict points to have a chance at a top few in the XCM series however, a race where I could sleep at home and see the kids before I left made Tamworth the destination of choice. With -2 degrees overnight at Tamworth a midday start was a sensible idea that gave me plenty of time to thumb a lift with #TeamMacDesign and have a leisurely paced breakfast. The very talented barista Moxham brought some rocket fuel and showed us how it is done on the caffeine machine.

Setting up under the G8 Performance tent there was plenty of company and rego was a breeze. For a club event there seemed to be a high level of professionalism and David Harris on the mic kept everyone informed of the days proceedings.


On the start line I was well prepared with cameras front and back. My pockets were loaded with 2 gels flasks and 2 caffeine infused Shotz for the last few hours. Each bottle I had setup was charged with electrolyte so I was confident I wouldn't have any nutritional issues. I took off with the gun however, a slight pedal / foot coordination issue held me back a little and may have caused a little accident behind me.... See NBN news for a good veiw! I fought my way through positions and by the top of the first climb I had just snuck past the top elite girls and was sitting with the male masters leaders. Up ahead I could see Andrew Lloyd ride away with some of the other elite solo riders. I felt that I was riding at a fairly good pace however, the gap just seemed to grow. After the first lap I was down over a minute, by the third I was over 2 minutes down.

On the third lap I had moved up to third in Elite Men and I didn't really feel fresh. I started to question if I had trained too hard during the week. I know my help flexors felt pretty smashed from playing school soccer on Friday and I was convinced that was my issue. I was questioning if this was one of those races that people talk about where they just have nothing! Anyway, I took off my helmet camera, washed my glasses and all of I sudden I seemed to feel great. I tried to lift the pace a little but the track was quite hard to really put the power down in many places as there were so many switchy sections. I was starting to really enjoy the course and each lap I seemed to pick better lines. This helped me to keep my lap times quite consistent even as the race progressed. 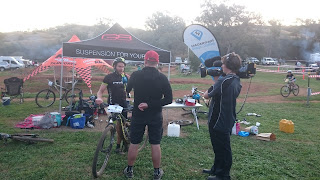 With two hours to go I was getting some splits suggesting that I was getting to within a minute of Lloydy and I seemed to catch up this time quite easily with 3 laps to go. I did a comfortable lap with Lloydy before resuming the pace I had held for the first part of the race. I was hoping he would sit on the back as I still had the camera rolling but he backed off the pace. I rode the last two laps feeling like I still had a fair bit left which was a great way to finish the race as it also meant I could really enjoy the track. There were quite a few rewarding downhills, jumps, berms and technical rocky sections. I liked that most of the technical sections allowed for beginners to choose the easier b line while some of the a lines required concentration to pick the right path. The course did call for tubeless tyre setups due to the amount of rocky sections so it was quite fitting for the event to be sponsored by Stans Notubes which are the leader in tubeless wheelsets. I was looking for an excuse to come back and ride the Tamworth trails and it is amazing the improvements that have taken place in the 12 months since I last visited.

This will quite likely be my last race in the Evocities MTB Series as I have enough points to secure the win in the series. I really need to thank Pure Edge for supporting me to attend this series. There has been heaps of travel and I've been fortunate enough to car pool with either Jamie Vogele or Jason Moxham for most of the races. It has been great to visit several towns I would only ever drive through and experience some amazing trails in the most unlikely places. I really do hope this series can continue to attract more riders to visit not only the trails and clubs but also enjoy the towns themselves. 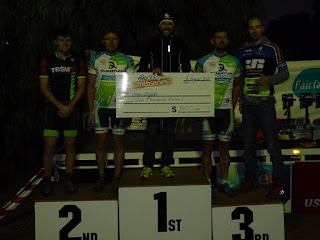 I have quite a few people to thank specifically for this round:
The Tamworth Mountain Bike Club for putting on such a great show. Thanks to David Harris for keeping everyone updated on positions and timing as the race progressed.
Stans Notubes and JetBlack Products for not only supporting this event but assisting me with some fantastic product.
#TeamMacDesign for passing bottles and the lift out. Thanks Jamie and Cindy Vogele for the lift back home.
G8 Performace for not only sponsoring the Evocities Series but assisting me.