This race turned out to be a family holiday so this is really a holiday report. Thanks Dubbo for being such a great place to bring a family! Its not often Jen will bring the kids and come to a race with me but, the attraction of the Dubbo Zoo and a couple of nights in Dubbo the trip was locked in. Being a 7hr drive from Port Macquarie the trip was broken up with an overnight in Newcastle before making the final 4hrs out to Dubbo. Merriwa was a good place to stop for lunch but would have also been a great place to stop for fuel. The trip from Merriwa to Dunnido was far greater than I had anticipated with the increase in fuel consumption as a result of 3 bikes being carried on the roof. An obliging farmer sold us 4 litres of fuel which just got us the Dunedoo petrol station with a spare litre in the tank! Arriving Friday afternoon into Dubbo, I visited the Anglican School and had a chat to the students about training and nutrition while throwing out G8 handballs.

Saturday was a fun day at the Zoo riding bikes with Jen and the kids before running and pram pushing around some of the extensive cycles path. It would be great to have such infrastructure to support riding with kids. I wouldn't feel safe riding to our local Billbong Zoo from Port Macquarie with the kids. 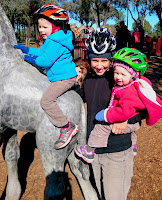 I hadn't got in a practice lap as the rain over the lead up week was significant and I was scared of getting my new bike dirty. From the race start I was a little cautious cornering as most of the corners felt wet and unpredictable. Mud out on track was really only a problem for around 10m, the rest of the track was in perfect racing condition. Dubbo like the other Evocities events have really impressed me with their trails. While the Dubbo course didn't take in all the trails, the 16km loop meant that the track was quite open and even though the course was mostly single track, overtaking was not a problem. The track also had a wide variety of trail types and natural features included to make it a challenging and interesting course to ride. While there were little drops and challenging sections, there were clearly marked A lines providing all riders a chance to stay on their bike and complete the track. I was glad to listen to the local advice and chose to rode on the Pivot 429SL. It was a no brainer, the dual suspension make the race so enjoyable that at times I had to keep remember to keep the race pace on!

With the race being just over 30kms from town and at 0 degrees I took the option to ride out to the race start. By the time the race started my Garmin had warmed up to 2.2 degrees. I opted to start in arm warmers which only lasted a couple of laps as the weather really came out nice. In fact, I was taking down a bottle lap to try and keep on top of my hydration.  During the first couple of laps Shaun Lewis and Andrew Lloyd started to make a little gap on me. It wasn't until the end of the second that I managed to catch on the back. The third lap felt a fair bit slower. I felt that Shaun was slowing the pace down to save himself for a fast last lap or two. I know I cant compete against him over a shorter distance so I made an effort to increase the pace. As I increased the pace Andrew dropped off and I just kept the pressure on. Part way through the second last lap a little gap formed and I had the chance to ride more sensible. Shaun took it easy for the last lap which meant I too could have a last an enjoyable finish to the race.
A big thanks to Cattleman's for being so accommodating for families, the location right on the cycle way was perfect for family adventures to the zoo and local parks.
Thanks to the Dubbo Mountain Bike Club for putting on such a great weekend that my family could be a part of.
Once again, thanks to #teammacdesigns for bring out my Dad's new bike from Sydney and for passing bottle
Thanks to Shotz for having amazing electrolytes that I have become so dependent on!
A special thanks to Pure Edge for supporting me in attending the Evocities Mountain Bike Series.
Thanks to G8 for being a major sponsor of me and the Evocities Mountain Bike Series
And Dad, thanks for letting me ride your new Pivot Mach429SL, it went pretty good :)