Bathurst is a long drive from Port Macquire. With Jamie Vogule as designated driver and the goal of attending the junior mtb race presentation we were on the road around 7am Saturday morning. I had managed to swing a bag of G8 Performance balls for the juniors race from the Port Macquarie Company owner David Lee who happens to be a major sponsor of the Evocities Mountain Bike Series.

At the junior presentation there was limited time for a Q&A as the kids were freezing! It was great to see such enthusiastic athletes. 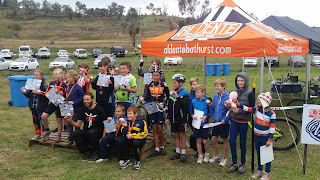 I checked out an easy lap of the course after preso with as much warm gear as I could find before heading back to our accommodation. Thanks to Jason and Ian from McArthur Design and Drafting there was no camping in the icy conditions! I finished off my bottle of Shotz that I had filled up earlier in the Blue Mountains before refilling the bottle at the accommodation. I dropped in a Shotz tab as before but half way through the bottle I relised it didn't quite taste the same. I checked the colour of the water and it was yellow, as it should be after adding a Shotz tab...... Either way, within an hour I had lost my appetite, then another hour later I lost what dinner I had manage to stomach. After another few spews during the night at around 6am I decided I couldn't race. By 8am I had managed to get some soup down that was high in salt and fluid and it seemed to stay down, so I thought I would give the race a start.

As the gun went I tried to get a good spot into the first single track as there wasn't a whole lot of passing and I was scared of thorns that live just off the side of the track. I was sitting quite comfotably around 5th for the first few laps of the race and I knew that holding 5th would be a great result considering my nutritional strategy in the lead up. By 2.5 out of the 4 hours completed I thought I should try to eat something and had my first gel of the race. Normally I would have consumed closer to 5 by the same time mark! With 90 minutes to go I managed to stomach another 2 gels and somehow sneaked through the field to keep hold of second.

The layout of track was quite interesting and nothing I have really raced on. Due to the extent of open grass field and lack of vegetation, it was very easy to keep track of other riders progress. It meant that when I did get ahead of the chase group with 2 laps to go, I could see exactly how far ahead I was sitting and how much effort I had to apply to keep that gap! It also meant when chasing you could get immediate feedback on if you were catching or dropping off.

The course design was quite open, fast and flowy. It was obvious that most natural features available were taken in to allow for an interesting track. There were plenty of windy climbs that kept the gradient comfortable and allowed for a track that suited all abilities.

It sounds like there will lots more track development in the future. With an already fun track, I'm happy to head back and see what more they can do!

A big thanks to #TeamMacDesigns for the pit support and accommodation, #PureEdge for helping me with this series and G8 Performance for looking after me feet, sponsoring the Evocities series and looking after the juniors.
I'm grateful once again to be on an awesome Jet Black blinged Pivot Les for thes smooth trails around Bathurst. See you guys net year :)