I have done two Everesting efforts in the past. My first was a sub 12hr event involving 200 reps of a steep local climb on my roadie which, when compared to a 24hr race, didn't seem like too much of a challenge. My second Everesting effort I made harder by throwing down a low carb food strategy and fixed wheel handicap. I put up a charity post I wanted people to like on Facebook and only received 600 out of a desired 1000 so I went on to complete half my second Everest eating nothing but eggs and riding the fix wheel mtb before swapping out for the roadie. I hadn't really considered going for a third any time soon however the concept of riding an 18kg (feels like 180kg) bike on an almost flat segment of road in the middle of Melbourne sounded just like the kind of insanely stupid challenge I was after. Joined with #climbfornepal I had a good reason to do something a little silly. 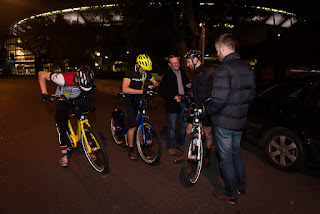 I booked my flights around 4-5 weeks out from this event so I was kind of committed to ride however a week out an email circulated that was speculating that a distance of between 600-800km would need to be covered in order to hit the vm. Everesting isn't always fun but with uncentainty of the exact route I was almost planning on finding my own more achievable hill around the Melbourne CBD so I didn't need to waste my whole long weekend.

I planned my flights to allow just over 18 hours to complete the event. With both my previous efforts taking around 12 hours, I felt 18 hours would give enough time to reminisce with the boys before jumping on a plane. Checking into Virgin at Port Macquarie I was informed my flight was going to be 3 hours late. This meant a window of 15 hours for riding and with people speculating a massive time commitment I was disappointed that I may not have a chance of completing the distance.

Arriving in Melbourne, I ran straight to the lounge, got changed, got my coffee charge and jumped in a hire car with Jason Moxham who flew down from Sydney to help me out! Arriving at the MCG I had my seat and pedals ready to swap out of the City Bike but due to anti theft measures I ended up using the amazingly heavy and comfortable standard seat. Jason set my bike up and it was time to start busting out some laps. With Dave and Rich starting around 7pm, I was already 22 laps down by the time I got pedaling at close to 8.30pm.

Once I got started it was time to work out lap times vs vertical meters gained. I was roughly able to hold 25 laps per hour which would mean a 20 hour event. With an obvious lack of time I thought at best I could do half of the distance and still catch my flights. 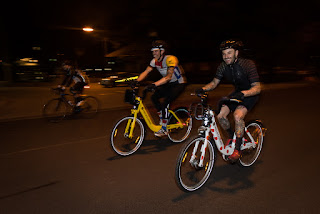 I couldn't believe the support of this event by the locals. Coffees seemed to keep flowing and the mates I met during the first night were great. Dave's wife Sarah impressed me with her ability to beg and plead in order for the event to be safe and possible for the riders. Her traffic directing was great and, while we didn't make any car stop when they weren't required, Sarah just prevented cars from pulling out in front of us. I was most impressed with her ability to negotiate free coffee not once, but on several occasions from local hotels. It seemed like everyone that came out to visit either dropped off a box of doughnuts, brought a load of coffee or cake. The local restaurant owner that brought over buns and rolls was outstanding. I made sure there was no wastage for this supporter! I'm not sure if it was the encouragement from Dave and Rich that convinced me to change my flights or the company by randoms on the ride or the food and coffee that was delivered in pleasing amounts but moving my flights back I now had well over 24hr available. 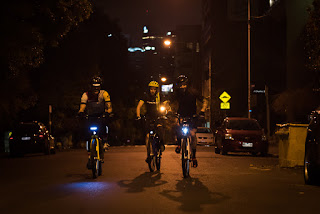 This is where things started to get interesting. I was mindful of how much caffeine I had been consuming and so I really wanted to go easy. At around 8pm I headed into my nutrition bag for more Shotz caffeine gels but I was all out. I was starting to get the nods so I needed something! I managed to find 3 cold coffees on the support table that helped me through the next hour. By 10pm coffee wasn't cutting it so I had to put the order in for NoDoz. Being careful once again I managed to only take 4 tabs to keep me alert until 2am.

The last few hours really dragged on. Rich was starting to struggle and I think most of these struggles come down to sleep deprivation and just the thought of sleep deprivation. At 6pm I recall estimating we will be finished by 10pm. At 7pm I estimated 11pm but the required laps weren't completed to just after 1pm. In the last couple of hours I got to meet Ben who not only kept me company but straight after the event helped me out with a shower and somewhere to sleep for 90min. It was only a short sleep as I had to take the share bike across town to the airport shuttle bus. For some reason the navigation on my phone wasn't working perfectly and I ended up riding past some very interesting night clubs on my way to the shuttle.

Once I made the shuttle and got to the airport lounge I couldn't eat a thing. I had no appetite but I was very dehydrated so I went for the juice and water option. By the time I flew into Sydney and found the lounge there things had changed and I had a serious savory breakfast. 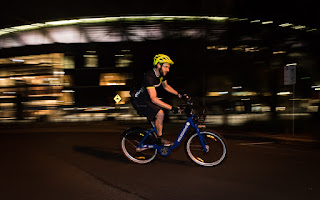 I have no recollection of hearing the flight safety talk, the plane take-off or land...

I was asked several questions during the event but one that stood out was how do you train for Everesting? I guess I feel like I know how to pace myself for a 12hr race and could do a 12hr at anytime with just a simple taper and carb load, no specific training required. Training for Everesting on the otherhand should involve hill repeats. Hill repeats is something I have excluded from my training program as I have started using power and Todays Plan. I was super impressed with both Rich and Dave in attempting such as event. Without having extensive overnight experience I think they both performed outstandingly well and I'm sure they have learned heaps about themselves and how hard they can go. This was by far the hardest event I have completed. I'm now considering Brisbane CBD on their bikes for my next Everest!

Coffee
Generosity - both people with their time, cash donations and motivational nutritional gifts
Gourmet sangers and buns
The company, there seemed to be an endless supply of jean clad hipsters to ride with
Seeing the number of laps finally down to 2 digits


Everyone else that came out and bought company and food.
Thanks @melbacycle for the pics :)