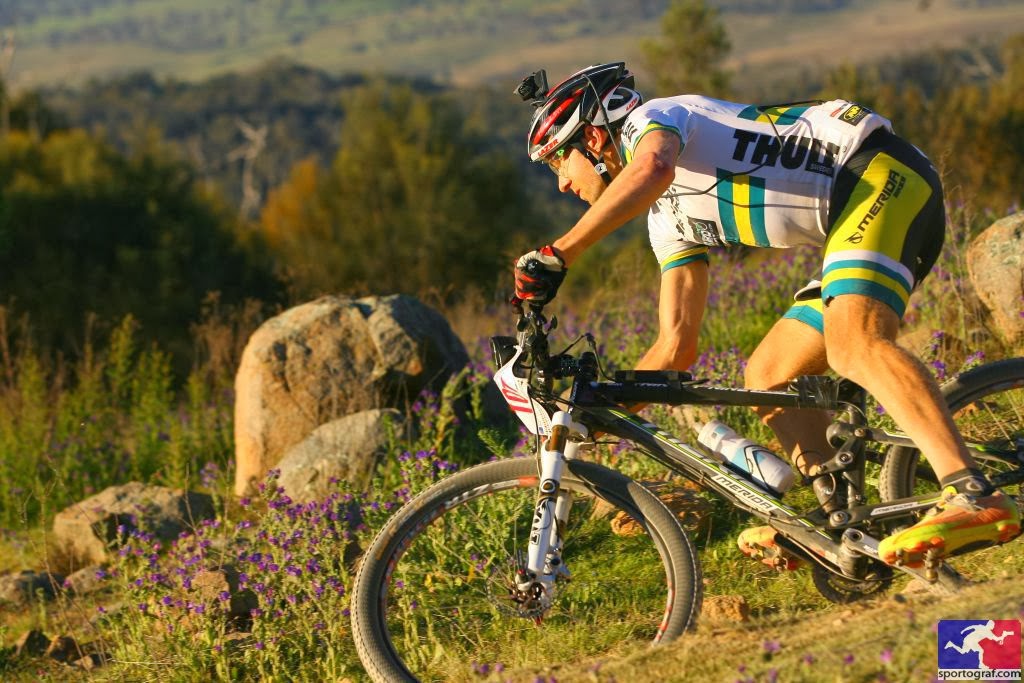 The most important race of the year was also the race I had thought the least about. I had applied for a week of leave from work leading up to the event but, with my school taking a serious stance about being available for year 12 students during this week, my application was denied. So instead of chilling the week before, I spent the week trying to finish uni assignments and organise two school camps.

Jen left on the Thursday for Newcastle to leave Archie with her parents and I had the 3.20pm flight out of Port Macquarie booked for the Friday afternoon. As I waited in the school car park for my lift to the airport, I was informed he had left for hospital with gall stones. Just then, the airport called to see if I was going to make the flight. At the airport my ticket had already been printed and was waiting for me through security! 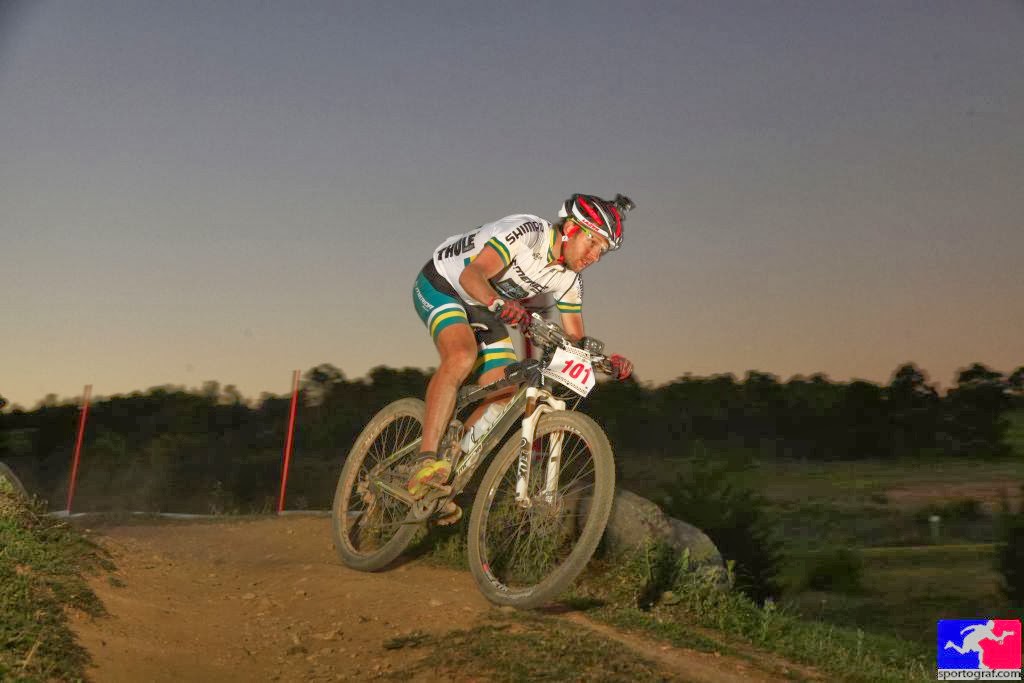 On arrival in Canberra, we had a quick trip into Cycle City to grab my tweaked bikes and then we headed for my brother's house for a late dinner. I listened to a recording of the race briefing and went through a last minute check to ensure everything was in order for the race.

I tried hard to sleep-in on race day but the best I could manage was 5:30am. Breakfast was a combination of Nutrigrain and Crunchy nut Cornflakes before heading out to the race. At 11am I had a full pit crew consisting of my parents, Jen, Paul, Brett, Steve (from Thule) and Duncan. Over the next 24hr I don't know who was helping in the pits but these guys did an amazing job to keep pit transitions fast. 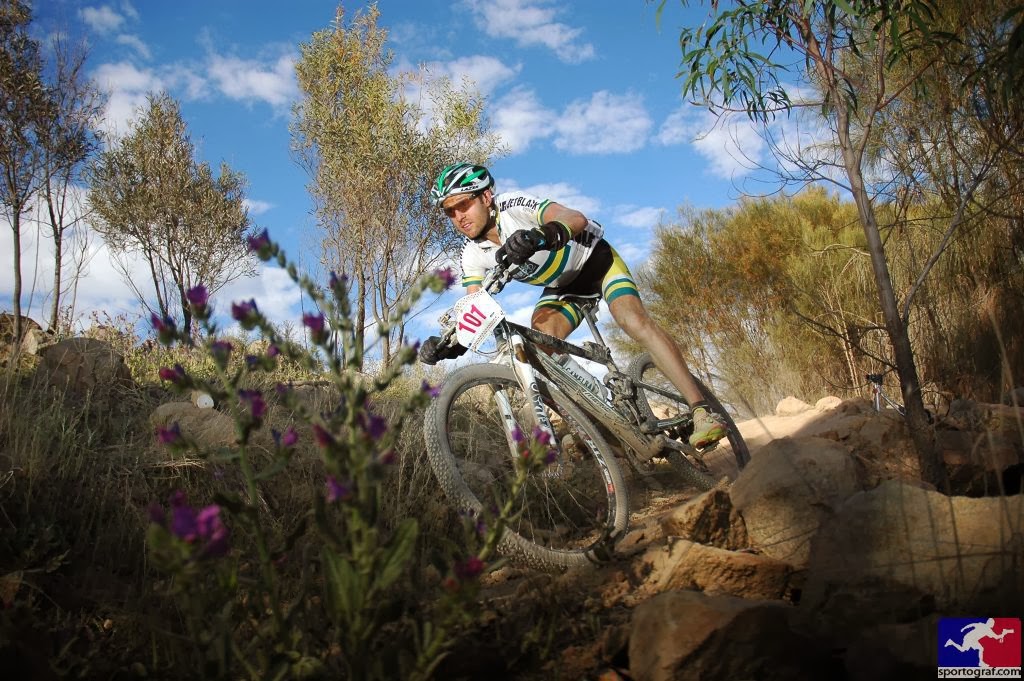 The race started at midday at what seemed to be a silly pace for a 24hr event. I was just holding a wheel in the group as riders jostled to hit the first single track climb in a good position. I rolled in behind Matt Page from the UK and Cory Wallace from Canada as they were the two riders I was keen to watch for the first few laps. Ed McDonald did a solo ride off the front and I was surprised not to see Cory chase him, as he seems to have a habit of starting 24hr races at an unsustainable pace. I was happy to sit back and watch as Andy Hall moved to the front to do some pace setting.

We were getting lap splits to Ed who, by 4 laps, was ahead almost 7 minutes. Around this time, Andy's coach told him to get off the front and so I looked to maintain Andy's pace and moved to the front. He and the group of 4 riders decided not to stay with me as I bridged across to Ed. Ed and I developed a gap on the rest of the field but Ed didn't stay with me long and pulled the pin on the following lap having no intention of finishing the race but just the plan to mess with my head! 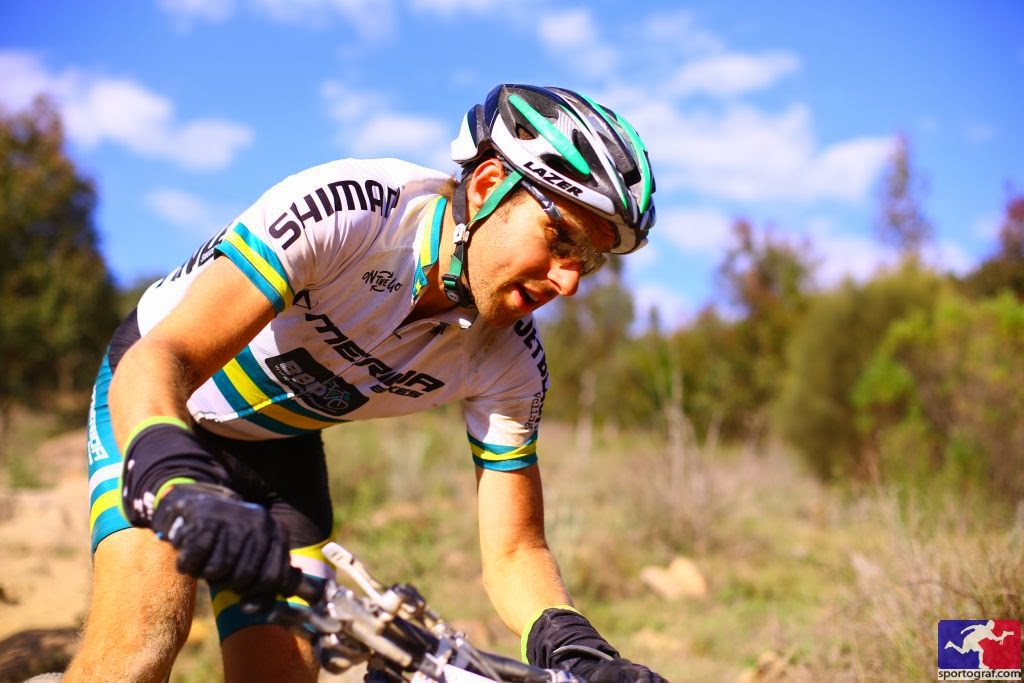 Continuing a consistent pace until night time I extended my lead to 12 minutes whilst still riding at a comfortable tempo. As night started I was getting splits back to Cory who had started to make up a couple of minutes per lap. I rode a few laps with Scott Chancellor during this part of the night and I recall not using my back brakes for several laps as I was developing some tendinitis associated with having the brake levers too far from the bars. I wasn't too concerned that my gap was being reduced as I was still riding comfortably, just a little cautiously without a back brake. Cory, chasing hard, crashed quite badly and his laps times slowed significantly as my lead extended to around 20 minutes. 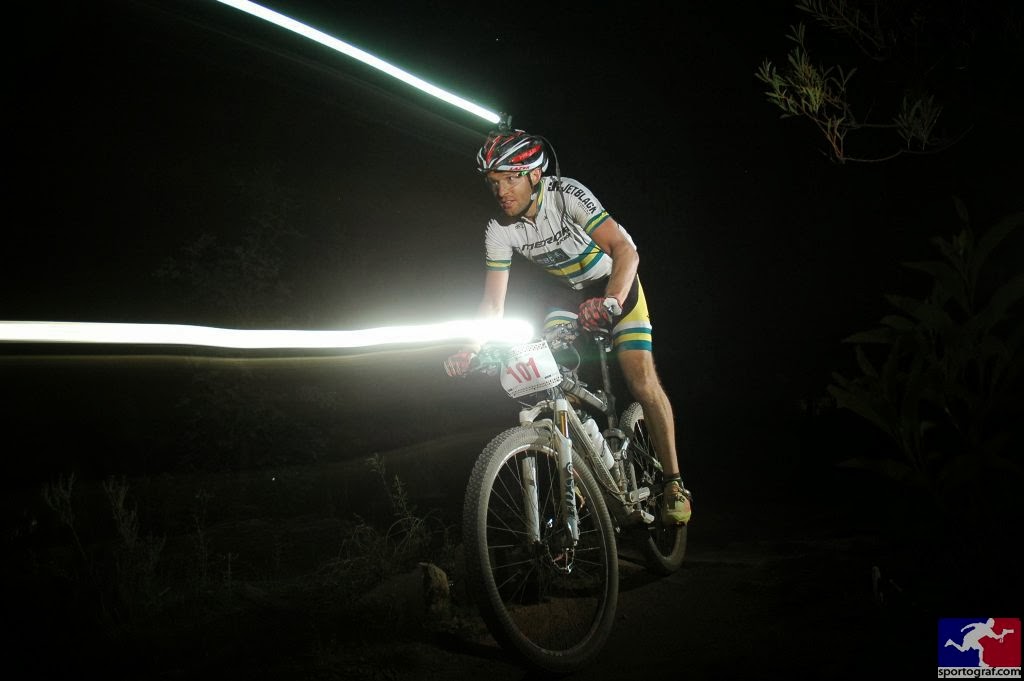 Swapping bikes around midnight to one with brakes closer to the bars reversed the inflammation I was developing and I was back to having fun again. During the night I was trying to limit my caffeine intake and I regret not having more Shotz caffeine gels to keep my eyes open during the race. There were two times when I recall waking up to find I was heading towards massive boulders off the side of the course!

As the sun came up my lead was still around 20 minutes and I was riding at a pace that I felt comfortable with. As I was getting laps splits indicating further gains I reduced my pace and planned to save my legs for the last few laps that were going to hurt regardless. I got a lap ahead of third and fourth place in the early morning and found a New Zealand rider Mathew Lees for company. For a guy riding with flat pedals he was smashing the course. He was happy to take more risks than I was on the last few laps. 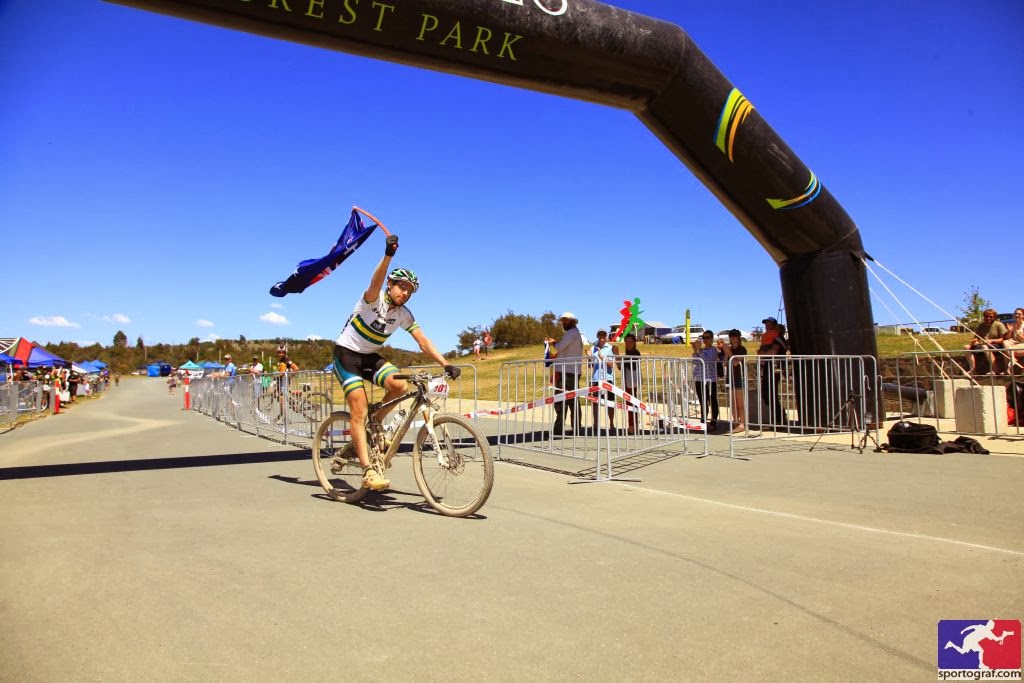 As I continued to get lap splits I worked on maintaining a similar gap back to Andrew Lloyd who was having a great race. I wound back the gel intake as the intensity was much lower than earlier on in the race and started doing calculations on how many more laps I would need to complete. Coming into transitition at 11.28am I had a gap of 32 minutes back to second place. Knowing that Andrew could make it through for another lap I took the safe option and headed out for a final lap. The race course at this stage was getting quiet as not all riders were heading out again but there were people still deciding positions on their last lap. I saw a couple of guys that possibly should have skipped the last lap as they required escorting back to transition. Coming into transition, Paul passed me the Aussie flag and I rolled across the line completing 27 laps and around 460km.

I need to thanks heaps of people for making this race possible for me. 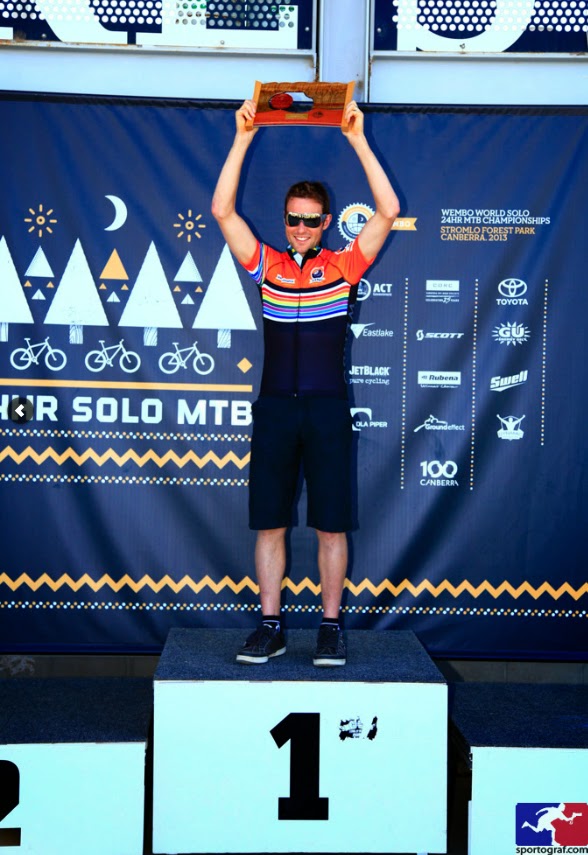 Merida - I rode two identical 99 duallies which I put 650b wheels on for a little more comfort. These are my favourite bikes at this stage however, I am looking forward to trying out the new big 99 and big 7 bikes next year.
Bike Bag Dude - has looked after my flights to get to this race allowing me to also fly Jen to the race while leaving Archie in Newcastle!
Thule - Thanks Steve for being so enthusiastic in the pits, the lap splits were very useful!
Jen - for running the show in the pit and knowing how to organise the tent for fast and effective transitions.
Jen's parents - for looking after Archie, freeing Jen up for the weekend.
My family - for doing pizza runs and assisting in the pits.
Tanya and Duncan - for providing nutrition for my pit crew (which I was also able to sneak).
Paul and Brett - For driving down from Newy to do support. You guys were a great help.
Cycle City - for a last minute check over and wheel swap.
Gordon Street Cycles - for their ongoing support.
Shotz Nutrition - I only had 2 bottles that weren't electrolyte and I grab them by accident!
Conti Tyres - for providing some awesome 27.5 tyes in x-king and race king.
Jet Black Products - for lining my bikes up with Niterider lights, Crank Bros bits and pieces and bling Stands wheels.
OnTheGo - for a kit to race in.
Also a big thanks to Northwave, Adidas and Lazer Helmets for providing some very cool products.