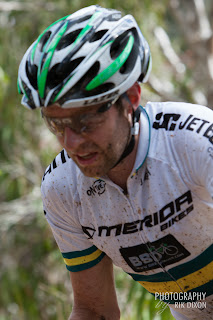 After riding the Paluma Push in 2012 I was keen to come back. It's set up in the mountains 1.5 hours from Townsville and is a sell out event. I questioned the event organisor on why he doesn't extend the cap and I agree with all his reasons. The infrastructure at the event start and finish wouldn't easily cope with an increase in riders and any event that sells out makes it feel like a privilege to ride. This is the exact experience I had. I felt lucky to ride the Paluma Push. It is a race which has a bit of everything. It has two different courses. The 45km and 65km options cater for athletes of all abilities. I was stoked to be travelling and camping with some juniors from Mackay Christian School who, at the age of 14 and 15, really enjoyed completing the 45km as their first ever race.

The start of the race is fireroad and has a significant climb to sort out the field before heading into the more technical rainforest loop. The start was at a good pace along this first fireroad as a few riders stretched their legs. I was interested to see how I would cope on the first climb. Normally the top contenders ride away from me on the first few climbs but perhaps with some Euro climbing in my legs it was me setting the pace. The group dropped down to 5 as we hit the rainforest section. This section is one of 4 extra sections the 65km course follows. The pace through here felt comfortable as caution was taken to avoid slipping on wet roots, bridges and clay. I was prepared for a few nasty sections that caught me off guard last year.

Leaving this section we were in the middle of the 45km course riders. Still with 5 of us together we all took turns to set the pace and for the next 20km we rode together. At times I had the desire to go faster so I looked for a chance to move to the front. Heading down a fireroad downhill a little gap had formed back to the rest of the group and I used the opportunity to hit the next climb quite hard. When I checked if I had a gap a few minutes later I could only see one rider chasing. I kept on the pace and was feeling pretty good. The bike was set up well and I felt like the hills were really short in comparison to what I was riding in Austria! The middle section of the course is through farmland and there were some sections that I had to limit my pace as looking for the pink ribbons tagged on trees was often the only way to find the course. Heading up the last hill I had a good look around for chasing riders and was able to back off the pace a little. 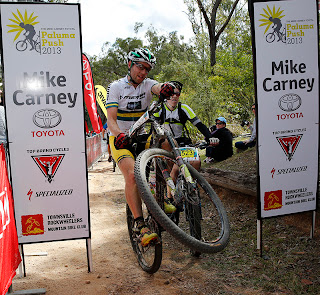 The last 9km of track is fantastic. I averaged over 25km/hr as the track, being mostly single track, was fast and flowy. This section of track is a great way to finish a race as it didn't require much energy to just keep the pedals turning. Coming across the line I was only a couple of minutes ahead of the chasing boys who had a sprint finish for second and third.

A big thanks to Peter Gibson and the Townsville bike club for the invitation to come back and defend. This is a massive event for a club to run and has a great vibe. I'm impressed with the quality of riding and I am already planning on coming back next year.

Thanks to Peter Lister and Steve Downes for organising my lifts to and from the airport. Camping with the Mackay crew was great!

A big thanks also to my major sponsors Merida Bikes, BBD, JetBlack, Gordon Street Cycles and Thule for the support to do these races.