With only low intensity base kms and stitches in my leg it was always going to be a hard task defending my 2011 title. I went into the race hoping for a top 5 but realistically knowing a top 10 would be more achievable. I had to rely on some serious favours once again from the McAvoys and Flight Centre to ensure I could get down to the race and back to Port Macquarie in time for Jen's birthday dinner which happened to be on race day. 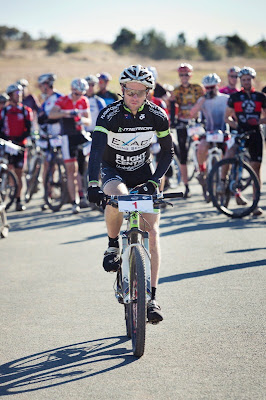 After a quick look around some of the track I was made aware of significant climbs and the advantage that local knowledge would have. After a quick photo shoot with Adam McGrath (Hcreations Photography) and carbo load it was time to unbend rotors that suffered from altitude sickness.

With a forecast of -4 overnight the early start was moved back to 10am which allowed for a comfortable 7 degree start and extra time to smash cereal. This also meant my 4pm flight was a little closer to the race finish time. I did the math and a 10am start with an estimated 2:30pm finish would leave 30mins to get showered and to the airport.

I got called up first with the no.1 plate and all the warm gear came off. With fire road for the first 45mins of the race I was not going to be on the front. As the race started I was surprised with the pace that was being put on. I wanted to stay in the top 5-6 riders but everyone seemed to have the same plan. I wasn't sure when the single track would kick in so I tried not to be too far back.

Unfortunately when the single track did kick in I had slipped to the back of the group of 20 riders and within moments lost sight of all but the 2 or 3 riders in front of me. A few gaps opened up doing this stage as riders just in front of me had to unclip through technical sections or rode at a much slower pace around this single track. With nowhere to overtake it was just a matter of having patience and accepting that my race was all but over! After a few fireroad climbs I started to pick up a few more positions before my right shifter dropped off at about the 20km mark. The right shifter would have been handy during this race with all the climbing. 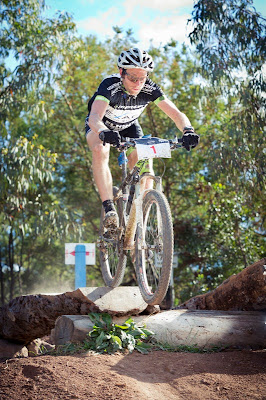 I had caught up to Shaun Lewis around the 30km mark but I was struggling to stay with him as I worked out how to use this now remote shifter. Changing gears wasn't possible through the single track but I could reach down on fireroad to change to an easier gear. The gears auto changed into a harder gear when the lever hit the front tyre on the downhills. By the half way point I had this gear changing system sorted and after a few caffeine gels it was game on. I started to pick up a few riders over the next few kms and I was keen to try and break back into the top 10. With about 15km to go I could see Sam Chancellor who had me working hard to catch him. With 5km from the finish I was surprised to see Dylan Cooper and Adrian Jackson. I thought these guys would have been in the top 4 or 5. I had no idea what position I was in. I was feeling good so I was keen to race for any position even it was for 9th or 10th. Heading up the last hill it was all big ring with the small ring developing chain suck which forced me to pedal at a pace that had me in front of Dylan and AJ by the final climb. In the last 1km there was time for a final effort before rolling across the line. I don't know how I managed to roll across the line in 4th but my last lap was the fastest second lap out there. On closer inspection my shifter just came loose and I could have stopped and screwed it back on in the tech zone. I was sure it had snapped off...