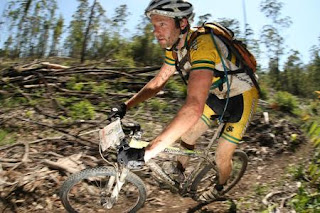 After a reschedule the Bottlebutt 100km finally came around. It was dropped from the xcm marathon series as the new date was after the series final, the Highland Fling. I was interested to see what elite boys would turn up considering it was the week after the Highland Fling. On the start line it was Lachlan Morton who I knew would be the biggest challenge. He is an absolute gun on the roadie and with some mountain bike experience I was really interested to see how he would approach the race.
The race started with about 500m of tar which, combined with the next technical fireroad downhill, really sorted out the field. I moved to the front early on and tried to get some sort of head start on Lachie heading up the first significant climb. Halfway up he had caught me and starting riding off. I caught back up on the first decent and over the next 4km there seemed to be a pattern where he would get away on the climbs and I would catch up on the downhills. This only lasted so long until my legs had had enough. We were 15 minutes into the race and I felt like I couldn't pedal. I was putting it down to walking up North Brother Mountain the day before but I think I hadn't recovered that well from the Fling. Once the pinchy climbs started so did the chain suck and it was all big ring and walking up the steep climbs.
The first 27km section of the course was mostly fireroad with about 1km of single track that will be completely groomed for next year. The organisers (iAdventure) had decided to leave out an additional 4km of single track here which I'm sure was a good idea based on the time it took to do the first loop.
The 100km riders got to do 2 laps of the Jolly Nose track which was mostly in good condition. I went into this section 60 seconds behind Lachie and caught him playing in some mud not far along. He had attempted to ride through a puddle which ended up being deep enough to hide his 29er completely. I'm not sure how long it took him to work out that it's often quite shallow around the outside!
I thought that these two loops around Jolly Nose would be the only chance to make some time on Lachie and I made an effort to keep the pace on. The last stage was going to be mostly fireroad so it would have been a good chance for him to put the power down and catch me. I mostly knew where the track went but I was quite surprised we went so far up Jolly Nose. It was loose and rocky and required the granny gear which wasn't going to work for me. Apparently this climb wasn't supposed to be in the race and next year riders will get more Jolly Nose with less climbing.
Between my first and second lap a massive tree fell on the course. It must have taken out an area of track around 15m by 15m. When I got to the tree I though I must have gone the wrong way! I'm just glad there was no one under it!
Rolling into the last drink station before the final lap I had drunk my full 3L camelbak and drink bottle. This feed station was awesome. I held my hand out for a lollie or 2 and got it loaded up to overflowing. I'm glad I punished so many lollies as I had finished 3 gel flasks already and had only 2 caffeine Shotz gels left. Combined with a banana and I just had enough food for the rest of the trip. Before I headed out I drank half a bottle and went out with a full bottle of electrolyte thinking that would be enough for the final 20ish kms to the finish.
About 2km past the feed zone I went to have a sip from my bottle. As I removed it from the cage a big hole opened up in the bottom. I quickly tried to drink as much as I could and then had to store the bottle upside down in the cage. With about 10km to go I had almost no fluid left at all and just kept riding the hills conservatively while looking behind every 30 seconds to see if Lachie had caught me. When I rolled across the line Lachie was there in front of me as he had missed a turn and saved about 10km of riding! He decided not to go back to where he missed the turn and the eventual second place rider was around 60minutes back. Lachie would have been less than 10, not bad for a roadie in such technical, nasty conditions. This race had a significant amount of unrideable components that will be taken out for next year!
Thanks Matt and Amanda from iAdventure for bringing a marathon to Port Macquarie. I'm so keen for next year where the local mountain bike club will be involved in ensuring a trail that is faster, smoother and far more rideable.
I'm glad Shotz were a major sponsor of this event. I really needed those electrolytes on the last loop to keep the cramps away. None at all!
A big thanks to Gordon Street Cycles who had the bike in great condition.
The XX gears were still working even after the muddy conditions. SRAM has always been super reliable in the mud.
I have the best Continental all round combination that seems to work really well in dry, rocky or muddy terrain. X-king on the front and Protection Race King on the back.