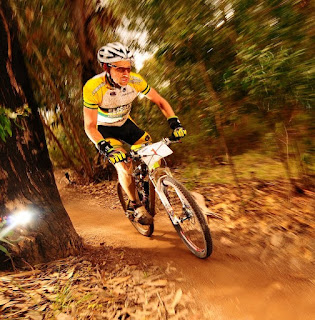 The Scott 24hr is always an important race. This one was even more so as winning it included an air fare to the 2012 24hr world champs in Italy. I knew I wasn't the only one intending on having a crack at the win so I was keen to ensure I gave it a really good go.

In preparation I got my bikes fit up by Mark at TBSM who uses Retul. It was fantastic knowing that each of my bikes were going to be setup exactly the same to the mm! It was always going to be a risk running a new setup but I really enjoyed the Merida 96ers this race.
On the way down to Canberra I also got to drop into JetBlack products and pick up my new 3000 lumen bar lights and 750 lumen helmet lights. These NiteRider lights are crazy, I really only tested them out during the race. They can burn through the 6 cell battery in under 1hr however, I just programed in an intensity that allowed the battery to last 11hours and it was still plenty bright enough. I was also not disappointed to put the new Stans Podium Wheelsets on the bike. There is nothing like a 1200gram wheelset to help get you up the hills.

Carbohydrate loading began the moment we stepped into the McAvoy household and the amount of food they kept shoveling into me was the perfect preparation for such a long race. After just picking the bikes up from Gordon Street Cycles I was enjoying taking it easy the day before rather than the usual run around like silly trying to get new tyres to seal etc.

The forecast wasn't looking good and I wasn't going out for a practice lap when I picked up my rego kit as it was raining consistently. I chose to run conti race king tyres on the back with the x-king on the front for a little extra grip and made sure I had a couple of pairs of clear glasses to swap out during the race.
I was really looking forward to the 2 lap hourglass setup that they run at the Scott24hr. It keeps the riding interesting as the combined loop is so large. I was stoked to be riding the Skyline Luge combination. It allows for a good rest down the hill where you pretty much don't pedal for 3-4km.
On the start line it was Ed McDonald and Andrew Hall that had me most worried. Andy demonstrated some good form at the JetBlack 12hr a month earlier and Ed, now racing with gears for the first time, has given me a run on his single speed on several occasions. I wasn't setting the pace early on and I was happy to watch Ed ride away as he powered off from the start. I tried to ensure I wasn't too far away from him and for the first few laps could see him off in the distance. It wasn't until lap 5 that I managed to catch back up to him and we spent the next couple together before Ed stopped to play with a leaking tyre.
I used this as a chance to try and settle my pace and get into a consistent rhythm. I built a buffer here of just over 10mins which I carried into the early night. Ed was lapping faster during the night and clawed back quite a few minutes during this time. I was being careful and was just thinking about the home advantage during the night and how much easier Ed would have been riding. The night was surprisingly warm, I took arm warmers but mostly didn't have them pulled up. 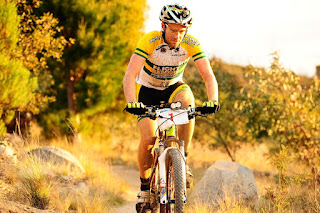 My caffeine strategy this race was to simply take a Shotz wild bean gel with 80mg of caffeine when I was tired and they worked a treat. I think I ended up having 8 of them during the night! At night time I also got to try out the new NiteRider 3000 which is a joke! I had a setting where I could burn through the battery in under 1 hour but I programmed in a setting to let it run for 11 hours and that was plenty for the pace I was going.
When daybreak came around there was well under 10 minutes back to Ed. I started to increase the pace a little as I was still feeling fairly good and I wanted to keep Ed out of sight. I got to do a few laps with an old friend from uni which was awesome as it's great to have someone to talk to when your busted at the end of the race.
By about 9am the blue lap was really starting to hurt. Not my legs but my arms and upper back. It seemed to have lots of techy rock sections that required little power bursts to punch up over rocks and steps. I was getting some feedback to indicate I was building a significant lead so I backed the pace off even more. My last few laps were getting slower but it seemed the rest of the solo field was starting to struggle with lots of people pulling out early. I was quite happy to see Ed had stopped riding just after 11am which meant I too could finish early and escape from the building storm.
I was impressed to see Jen and Archie out for so much of the race but I need to thank Chungy and my parents for feeding me during the night as Jen took Archie back to our accommodation. The food options were a little different with my mum running the menu instead of Jen. Toasted banana sangers were great, thanks Mum!
Merida have been very generous this year to help me out with 3 mountain bikes that were all used during this race. SRAM were also available to ensure I had bikes in top working condition.
A big thanks goes out to CORC for putting on the race and providing me with flights to attend the World Champs in Italy. I think I'll have a couple of easier months and start training seriously next year.