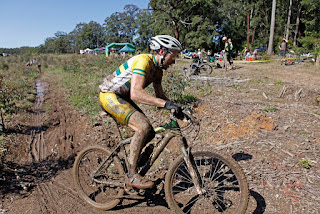 With a couple of weeks worth of rain leading up to the Pleasure and Pain Marathon I was expecting there to be a little bit of mud on the track. I had considered running more aggressive tyres but I went with the usual Continental X-King on the front and the Race King on the back. Riders who completed a practice lap on the Saturday were impressed with trail conditions and were raving about how fun the track was. I really wasn't keen to drive up to Coffs Harbour for them to cancel the race but apparently the race was going ahead regardless of the forecast rain. Arriving in Coffs Harbour around 2pm the rain had already started. It seemed to get heavier as the night went on and I went to sleep with the sound of quite significant rain.

When the sun came up on Sunday morning there was not a cloud in the sky. On the roll down to start line there were quite a few puddles around and I wondered how much of the track would be changed or removed due to the rain. At briefing it was determined that the race would be the same course as per dry conditions.

I was quite determined to get to the single track first and took off fairly quickly from the gun. I think this was a sensible decision as people behind were often slowed by riders who had to unclip etc. The Coffs tracks are fantastic and I was a little disappointed I couldn't rail the corners hard due to the amount of mud on the track. The Pleasure and Pain is a lap based event with the full distance being 4 laps of the 25km course. Half way through the first lap I had slipped into a survival/play safe mindset and was quickly reminded that this was a race as local gun rider Evan Jeffery managed to catch back up.

The first lap was actually quite fun. The 'cows with guns' section was mostly dry and very fast while the first section had some thick muddy single track. By the time I hit the second lap and after everyone had ridden the course in front it was a slop-fest. Comparing this race to Capital Punishment '10 I would say the conditions this race were far worse! Capital Punishment still had fireroads that were quite ridable and Stromlo was still fantastic. This race was amazing. There were all types of mud. Red mud that grabbed onto your tyre so tightly that no grip could be achieved. There was thick rainforest mud that was so thick it was a mission to push through. There was the mud that sprayed up from the water on the course and there was just swamp mud to ride through in low lying paddocks!

There were actually some really fun sections to be slipping and sliding through but I wasn't disappointed to learn, when starting my third lap, that it would be my last. I spent most of lap 2 and 3 in the big ring to avoid chain suck and the mud was just taxing. It was hard to eat and drink and I'm sure this was my worst race in regards to eating. In the end the result was closer than I would have liked with Evan finishing only a few minutes behind. I'm putting it down to local advantage!

I was so glad to have crank brothers pedals for this race. I put on my cheap candy pedals which retail for under $100 and they were perfect for the mud. I was disappointed with the amount of shoe rub I put onto my frame but other than that I think my bike pulled up pretty well.

I'll need to give the boys at Gordon Street Cycles a big thanks in advance for getting my bike repaired and back into race condition!

Jen also did well taking Archie out to his first race. It was awesome to have the little guy cheering me on :)