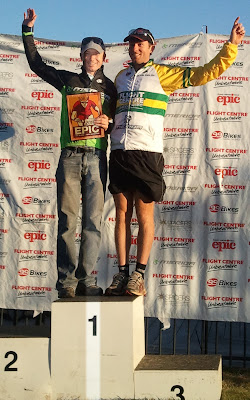 I was a little bit disappointed when the Husky 100 was rescheduled for the same date as the Flight Centre Epic. Being a Flight Centre sponsored rider I decided to choose the Epic and Im really glad I did for so many reasons.

Flying up to Brisbane gave me the opportunity to catch up with family and also travel out to the race with my brother and cousin who were already signed up. It was great to talk race tactics and strategies and try to pass on any advice that could make their day more enjoyable. The family made carbohydrate loading far too easy with my cousin having a highly over catered birthday party. I could barely fit breakfast in Sunday morning and I questioned my Aunty about the over-inflated number I was reading on the bathroom scales pre-race...

A race start time of 8:30am at Hidden Vale was very sensible. It allowed for an easy drive out from Brisbane and plenty of time to rego and drop bottles into the drink station crates to get them taken out around the course. Three drink stations on a 75km route seemed like heaps. I found Bec from Port Macquarie to pass me a bottle at the check points which was awesome. Thanks Bec!

As the race started I got a clear reminder as to why endurance mountain bike riding is far more popular than short Olympic distance. It hurt, my heart rate was going nuts and my legs were burning. I almost got dropped in the first 100m as the pace was ridiculous. I had to chase hard at the start and bridge gaps that were starting to form as people were suffering with the pace. Chris, AJ, Aido and myself seemed to make a small gap from the rest of the field. That is until the climbing started.

The riders who had started in an earlier wave helped to split the group. I was looking for any excuse to back off the pace and once I lost contact with the boys at around the 10km mark I started to race sensibly. I was getting glimpses of Aido and AJ up the road for the next 5-6km and managed to get across to them shortly before the first drink station. We had a few 50km riders with us that were happy to swap off the turns as we made our way to the base of the first big climb. I was thankful here that the boys were riding a more sensible pace and we rode together until the next drink station. The terrain here was mostly through farm paddocks so the trails were all double track and allowed for plenty of overtaking which we were still doing at this stage.

The boys must have backed off the pace to wait for me a little however before I caught up I had to pull a u-turn to find my dropped bottle...
Another 20mins later and I was back on the wheel of Aido and we chased to stay on AJ through the single track that finished at the 3rd drink station. It was only a few kms from the end of this section that we went past Chris who wasn't having much luck with flat tyres.

It was checkpoint 3 that Bec held out 2 drink bottles for me. I had the impression that there would only be 15km left so took the 1 bottle of Shotz and charged through. I looked at my garmin a few minutes later and noticed we had only covered 45km leaving 30km to complete on this last bottle.
At the next big climb it was a definite walk. It was here that AJ and myself managed to outwalk Aido and didn't see him again. We kept the pace on to ensure we were making a gap and made the decision to cross the finish line of the Flight Centre Epic as two Flight Centre riders in first place.

I made the comment during the race that there seemed to be heaps of single track. I think this place has a lot of potential once the graded sections of course become bedded in. It was obvious lots of work had gone into the single track. I'm keen to come back to the Merida 24hr next year to see what they have achieved by then!

A big thanks to all the Merida guys who came and introduced themselves to me, its fantastic to put faces t names.

A big thanks to all my sponsors but most notable for this race were Gordon Street Cycles once again for getting my bike into race condition, my brother Mat for the ridiculously early airport drop off and pick ups and Peter from Tailwind Promotions for organising such a professional event.