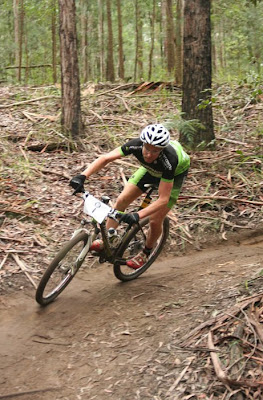 This was an event I had wanted to put on my calender but couldn't due to a pending birthday. It all worked out perfectly with Jen wanting to show off our new son Archie James to her grandparents so we had to make a trip to Newcastle!

On race morning I felt I had everything under control. I arrived a few minutes before rego however by the time I did four trips from the car to the race track and had a chat to a few guys there was only five minutes before race start and I didn't even have race numbers on or drink bottles sorted. I guess I rely on Jen a little bit to help me get organised!

I rolled down to the race start with pockets jammed full of food. I had less than 30 seconds and the race started. My warm up was the first two laps and I finally started to feel like I was racing. Without Jen feeding me I was loosing heaps of time each lap stopping to to grab a bottle and putting a Shotz electrolyte tab into it.

About 2-3 hours in I managed to recruit Paul and Di Perry as feeders who I think were feeling sorry for me! They were great and each lap I was grabbing a bottle and food which was perfect for the 35 minute laps.

On lap 3 of 4 I had caught up to Rockstar racer Troy Glennan and I was keen to see how long I could stay with him and Dwight as they tagged teamed as part of a 2 man team. After 3-4 hours it became apparent that we were 1st and 2nd overall racing for the top position. Even though we technically weren't racing in the same category it is always a pretty good claim to win overall. I wasn't going to attack the boys at any stage during the race as I felt I was riding to my limit however, when Dwight slowed down with 3 laps to go I thought I would keep trying to maintain the same pace. In the end I'm glad I made the move then as another 2 man team was also chasing for overall line honors and moved past the Rockstar racing team to finish only 3 minutes behind me at the end of the day.

I really liked this race, it was great to race around with Troy and Dwight and the trails were fantastic. After a predicted showery day it was awesome. No rain at all and the temperature was perfect. Everyone was so friendly out on track and I was surprised there were no massive bank ups with 400 people racing and so much single track with limited passing chances. The race felt very professional, we could have been at a National Series race with all the sponsors flags and bunting. It was a great atmosphere. Thanks Rocky Trail Entertainment.

I also need to make a special mention of my local bike shop Gordon Street Cycles who had a very successful team result across both the 4hr and 8hr events.

Jetblack Products sponsor me and also the event making it possible for all to race and have something worth racing for. Having light weight wheels was such an advantage on this course as there are so many corners to accelerate out of and being light on the climb was awesome.

The Merida hardtail also performed very well during this race. It is the longest I have ever been on a hardtail for during an endurance event.

Shotz nutrition also had me on some special mango passion gels. I think they will become available soon, they are awesome!