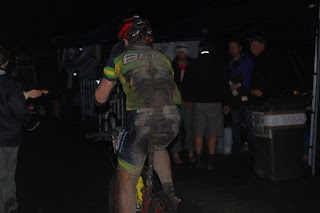 There was much thought and discussion before I planned on attempting the Kona this year. Forrest is not an easy place to get to when you live in Port Macquarie and with plane tickets close to $500 each I almost attemped this race without support from Jen. In the end we decided it would be good practice and I was keen to try out the new lights and new strategies for 24hr racing. In the end, Rich from Dirt Works was our chauffeur and drove us the 2hrs to Forrest from Melbourne Airport and back again early on the Monday morning, what a champion! Norm and Jess Douglas put us up at their place on the Friday night (and cooked us a feast) and we were grateful to not be in a tent as an incredible light show and storm hit Forrest. I was not looking forward to other muddy 24hr!
In the morning we awoke to a fantastic looking day and apparently most of the track had dried out during the early morning before the race started. Lap 1 was a little wet but as time ticked on the track dried out and became really fun. That is, until it started raining. It only poured down for a relatively short period of time however the constant sprinkle during the late afternoon saw the track deteriorate quickly. There was one particular section I was really enjoying skating along that finally got removed as it was getting dangerous.
At the start I initially just rode to heart rate and let the fast riders take off. About 4hrs in I finally caught up to the lead guys which included Dirt Works rider Troy Bailey. I took a more consistent pace and maintained this as I rode away from them. When the rain really started to come down I was questioning my motivation but I thought this would be great training just in case it rains at the World Championships! A spare bike and Norm in pits kept my transitions fairly quick and my bikes rolling nicely. I kept Norm working hard by covering my bikes in mud each lap.
The Kona has three separate loops, a first day loop, a night loop and a second day loop. I was starting to enjoy the first day loop when the night one started. This loop was significantly shorter than the first. I managed to do my 10th lap on the first loop whilst the rest of the solo field did their 10th lap on the shorter night loop which meant the lead I was developing was reduced significantly. I was looking forward to trying out my new lights so with a few quick transitions my lead continued to open up. The new lights are fully programmable via the computer. I set the twin lights so that the flood beam was on 600 lumens and the spot was on 50 lumens. This was perfect to get 5hrs of life per battery and, combined with a 200 lumen headlight, it was an awesome setup. Thank you NiteRider for the new 1200 system!
I'm keen to see how the NiteRider 600 would go on my head as well as the 1200 on the bars. I guess I will find out at the JetBlack Sydney 24hr!
Ben Culton was a lifesaver in this race organising a pizza run. What a legend, it worked a treat and gave me something to look forward to each lap. By about 2am I had caught up to Brad Davies who was in second place and rode with him for a while until I could see Andrew Bell up ahead. I planned on riding with Andy for a while but he got caught in traffic and I just kept on keeping on!
When the sun came up it was time to look forward to a new loop. I was, until we hit the first hill and my legs were starting to feel the toll of pushing through the mud for the last 18hrs. I think I ended up using granny gear to get up this hill the last couple of laps. This last loop had a few little technical logs but featured some really cool flowy single track that unfortunately ended with a final climb back to the last downhill. I started doing the maths around 8am and was trying to work out how many laps I needed to complete. I ended up passing a very sore Andrew Bell on my last lap. I felt sorry for him as his knee was giving him grief. Hopefully with a bit of training leading up to the worlds this guy will be back to kick some butt!
I was quite happy to call it a day at around 11:15am and get a quick nap before (and during) presentation!
The race had a more professional feel to it this year and I think FGP did a great job of managing a wet race.
I need to thank Jen and Norm (my terrific pit crew), Jess and Norm for their hospitality, Rich for transporting us (and Alicia for putting us up on the Sunday night) and my sponosors Dirt Works, JetBlack Products, NiteRider, Adidas eyewear, Shotz Nutrition and Gordon Street Cycles.