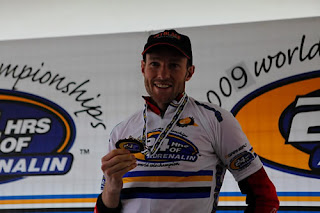 This year I was a little more prepared for this race. 15 months ago I was lying in a hospital bed with a neck brace and not being able to move I was wondering if I was able to ride again or race. Obviously God had other plans which I am thankful for!

Last year I suffered in the run and never got to race with the top riders. My plan this year was to try and stay with the fast guys for at least the first lap and then back off if the pace was too fast. There was a part of me that wanted to get into the single track first to try and see if I could put some time into the other riders.

We were called onto the start line 10 minutes before the race and the temperature was 36 degrees.

At the end of the run I was almost first on the bike. When I rolled out of pit lane I ended up right on the back wheel of Tony who was charging. He was smashing it, I kept telling myself to take it easy however at the top of the first climb when the chance came I snuck first into the single track. This single track must have been about 8km with no chance of passing so I really didn’t want to get stuck behind a slower rider.

During the first couple of laps I managed to make up little bits of time on the rough down hill sections so I could take it a little easier on the up hills. By doing this I knew Tony would be working a little harder as he wasn’t keen to be racing behind. In fact after a couple of laps I had to let him go as he was going way too hard for me. Cary, who was sitting in third place, caught up to me fairly quickly after a couple of laps and he too wasn’t keen to be chasing. By about four hours in I had decided I need to get a coach as I clearly was missing some fitness that these two riders had.

In the first eight hours I think we all had a chance to take the lead. The only way I went past these guys was during their pit transitions. I kept rolling through with a super organised and experienced team while the other riders seemed to be taking small breaks each lap. Around the eight hour mark the temperature also dropped significantly and I started to feel really good and put in some faster lap times and got ahead of the other riders. Cary then caught me back again and the race continued. Tony didn’t stay behind for long and quickly began putting time into us. By 1am I was down over 6 minutes. Tony must have retired shortly after this time and I once again managed to get ahead of Cary during pit transitions and developed a slight lead around 3 am.

By the early morning it was still a very close race, and I started to feel good again after possibly not hydrating sufficiently to combat the 36 degree heat during the first part of the race.

I was getting the lap splits so I knew how far behind second place was and I was looking for an opportunity to stop earlier than the 24hrs if I had a sufficient buffer. This was not because I was out of energy or didn’t feel good. It was more about not wanting to get bounced around on another lap of the quickly deteriorating track. At the start of the race the whole course was rideable. It severely lacked flow and smoothness but by the end of the race it developed quite amazing drops, bumps and lumps as any dirt between the pine roots was eroded. In the 24hrs I think I managed 360-370km which is significantly less than what is achievable on Australian tracks. I am really looking forward to next year’s world champs where we will quite likely see no granny gear climbs and some super sweet flowing trails.

I came through transition at 10.50am at the end of lap 21 meaning I had one more lap to complete in order to finish the race as a rider had to pass over the line after 11am in order to prevent a DNF. Coming across the line I couldn’t believe the media attention. It was crazy. I didn’t know where to look, where to go, what to say!

It was great that my support crew of Jen and Craig were clearly recognised as these guys worked so hard during the race to ensure I didn’t need to stop and the bikes were going fantastic.

This year I relied on some essential financial sponsors.

This year I also need to thank:

Lloyd and the boys from Gordon Street Cycles for organising my very cool race jerseys and keeping the bikes going when in AUS.

BMC bikes, the two Fourstroke 01 bikes meant I could swap bikes at any time and not be disadvantaged with a inferior back up bike as they are both awesome. The guys at DirtWorks have built them up with some really nice parts from Ritchey, DT Swiss, Stans, Race Face and Manitou.

Shotz nutrition have been very generous in their provision of product to meet my massive training and race needs.

JetBlack products also had me kitted out with enough gloves to suit the crazy weather in the mountains and amazing NiteRider products to scare away the grizzley’s.

Adidas eyewear this year had me covered for all conditions.