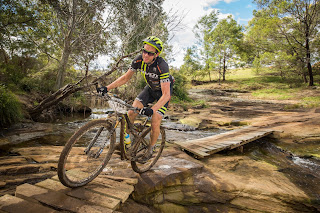 With a choice between contesting the XCM National Marathon Series over an action packed few weeks or the chance to represent Jetback, I chose to represent my most long term supporter at one of their main events. Jet Black Products have been looking after me for close to 10 years. The sponsorship started with NiteRider Lights and has progressed through pedals, Stans Wheels, Jet Black Products and Pivot Bikes.
This year I look back with appreciation and attribute my past success to the support and help from Steph and Daryl from Shotz Nutrition and through the use of Continental Tyres. Starting through this year I have when possible made a switch to use products distributed through Jet Black Products. As a result I'm now using using their nutrition (GU) and tyres (WTB). To celebrate GU releasing a new product, I thought I would give it a go. And not just a little go, an exclusive go for the complete 12 hours. This was going to be a challenge as the Stroopwaffel is designed more as a food product to quench hunger as opposed to a high GI liquid product deigned to rapidly absorb into the bloodstream to accommodate racing at a high intensity. 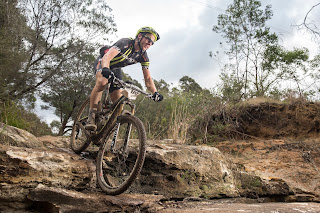 On the start line I had my pockets stuffed with individually wrapped Stoopwaffels. I wasn't sure how many of them I needed during the event. If I aimed to eat 60-70 grams per hour of carbohydrate I would need to be consuming around 3 per hour.
From the start I tried to hang around the top 10 places as I worked fairly hard to get into a good position. During this time the track conditions were quite ordinary, there was lots of slip and slide and people over-cooking corners. I was impressed with Rocky Trail and how well they managed to maintain a good track for the whole 12 hours. As the race progressed there were different lines taped off to ensure all of the track was rideable and safe. During the first few laps I was swapping off glasses each lap due to the volume of mud spray, however, by my last few laps my Adidas photo chromatic glasses stayed clean! I was impressed with how well the WTB Nano tyres worked in the mud. They are light but also have a fairly open tread pattern to help clear the mud. 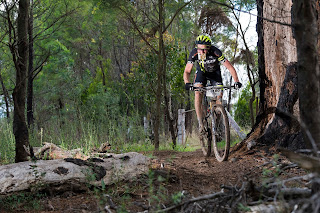 After a couple of laps I seemed to be lapping around the same pace as the leading two man team consisting of Mike Israel and Gary James. These guys provided some great pacing for me and encouraged me to stay fairly consistent with lap times. While I had to stop a few times to re-lube the chain and fill up drink bottles I was usually able to catch back up again. Around the 5 hour mark I managed to lap second place Sam Moffitt and as tempting as it was to back off the pace and ride with him I still tried to maintain my pace with the two man team.
Lights were due on after 5pm. This stop for me was a casual stop to put lights on, lube the chain and restock Stroopwaffels. Giving the boys a two minute lead I thought I would have a little go at trying to catch back up. Around 7pm I decided to just play it safe and take a more casual approach to the rest of my race with the aim of trying to improve recovery time in order to start training again for India! 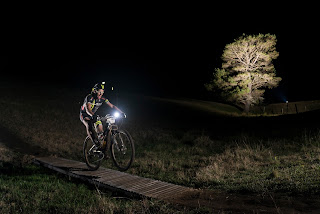 I would have to say I was quite impressed with the Stroopwaffel. The tally was only 18 for the 12 hours, so less than I thought. Normally I wouldn't be able to look at a food product that I consume exclusively for such a time however, I must confess I have had more than 1 Stroopwaffel this week when training!

I have thanked a few people through the report but a special thanks needs to go to:
Jamie Vogele for driving me down from Newcastle to Sydney and back.
Jason Moxham for letting us crash at his house and for passing bottles.
Dave Groupe for passing bottles and organising the Stroopwafels at short notice (as per my usual).
Rocky Trail Entertainment for putting on such a well run event.
Jet Black Products for supporting me and this event.
Thanks Outer Image for being out on the track taking awesome pictures! 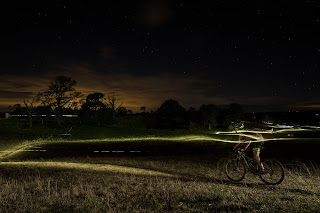