As part of a Duke of Edinburgh school excursion I was able to sneak an entry into the Huka Xl mountain bike race along with 2 students and my dad. We all entered the 85km race as this distance had the most amount of single track and would give a real sense of achievement to the students aiming to complete this course. This race was part of a massive cycling festival attracting over 8000 entrants across a variety of events at Taupo.
I had to set the example and demonstrate a serious amount of carbohydrate loading leading up to the event which fitted in well with New Zealand’s love of buffet. The pre-event show gave another chance for students to look at all the different nutritional options available and was a chance to check out the new 2014 bikes that are now available.
On the start line I managed to sneak up to the 4th row which meant I was around 20th heading into the first single track that started only a few hundred metres down the road. This first single track was on the eastern side of the Waikato River and didn’t allow any spots for passing. This wasn’t a problem as no one seemed keen to ride off the front. There were several gates in this first section of trail which all riders had to get off and throw bikes over or through. This was eventually starting to crack me as the top few riders kept riding off hard leaving the last few riders to play chase. I moved up towards the front around the 20km mark and lifted the pace slightly. The top group dropped from 20 riders down to 5 or 6 soon after as we rolled through the first drink station. It was great to see all the other DOE students from my school cheering on the side as I grabbed 2 bottles. I stayed on the front for a few more kms before luckily being overtaken by a skilled local who started showing me how to ride the Craters of the Moon trails. I was having a little bit too much fun and around the 35km mark lost my front wheel and high sided shoulder first into a gum tree. Being the same shoulder that I have busted twice in the last 12 months I was sure my race was over. I was really impressed that the top few riders all stopped to see if I was ok. I knew nothing could be done for a broken collar bone. As I lay comfortably off the side of the track, I planned ways to hide an injury from my school principal and tried to visualise how I could still be a useful father. A few minutes later I was back on the bike assuming I would have serious pain. After a few corners I was convinced I could finish a race with a busted collar bone and I continued past the next course marshals. 5 minutes later the pain was starting to increase but after half an hour I had caught 2 riders that had gone past earlier. I started to forget about the pain and started thinking about the nasty noises my bike started to make. At one stage I was convinced there were some crazy native birds with a frightening scream. The screaming continued but with no birds in sight it seemed my freewheel got lazy and wanted me to ride the last half of the race with a fixed wheel. I thought I was in third position at this time so I just worked on maintaining the gap I had to the rider behind. This was the worst race for me to have a freewheel issue. I was really looking forward to enjoying the flow of the trails however, with a busted freewheel I had to pedal the whole time. This meant riding significantly slower downhill and pedalling around sections of track that often caused my pedal to contact the ground. 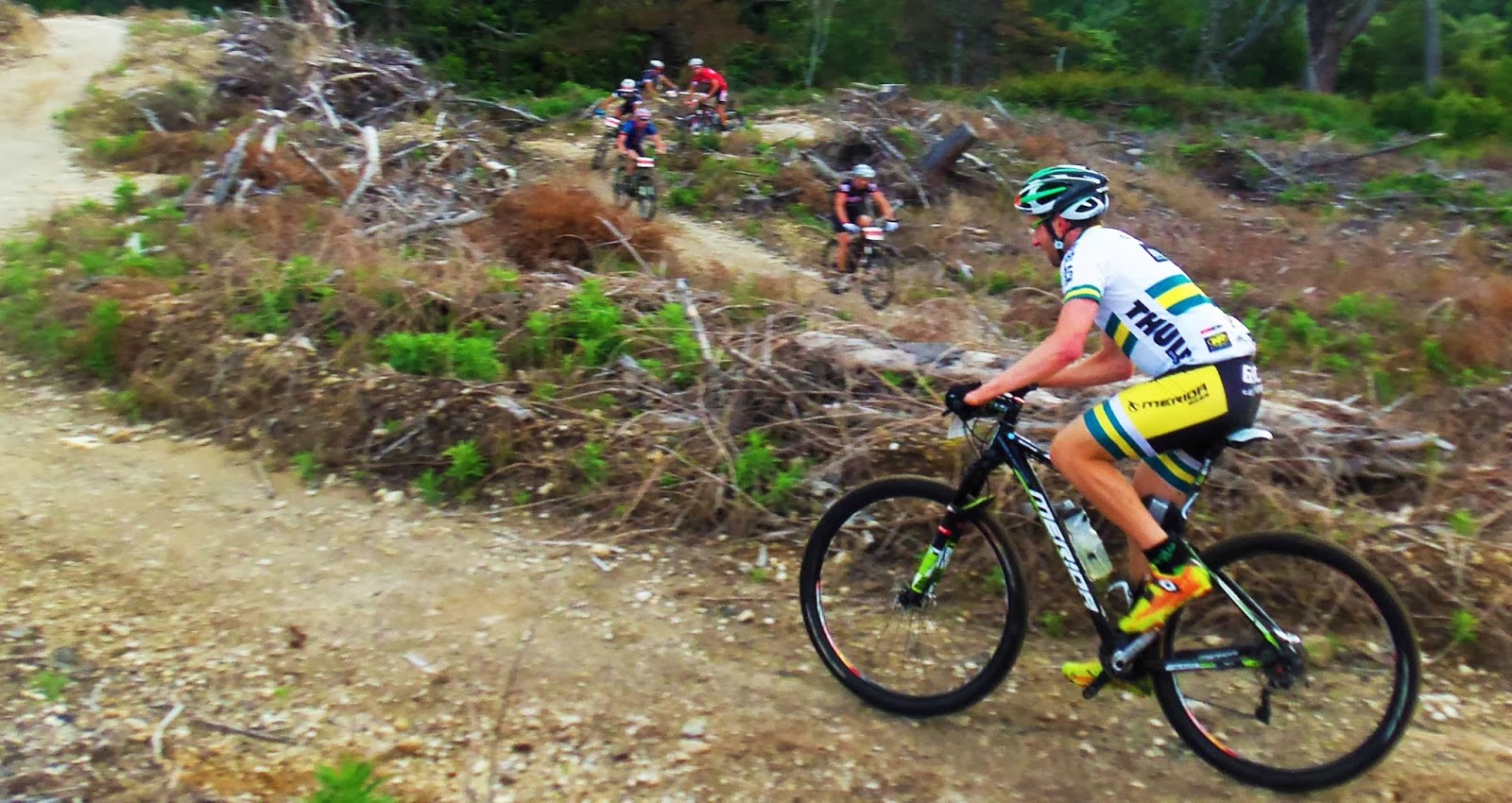 Heading through the drink station with 10km to go  I received feeback that I was 1 min down on 3rd place. I thought I was in third place! I don’t know how I managed to bridge across to this rider but I really should of attacked when I did. Instead, he got a nice tow to the finish. In the sprint we bumped handle bars and I missed half a pedal stroke allowing the freewheel to work its anti-sprint magic and I rolled in for 4th. I would love to come back and do this race again with a freewheel. The amount of single track was awesome. The boys from school also had a great time.
A big thanks to:
Merida Australia and Bike Barn, NZ for organising discounted entries.
Taupo Christian School for accommodating our school group.
My mum for supporting our riders out on track and my dad for giving up his race to ride with the students.
Heritage Christian School for supporting the school mountain bike team.
An ongoing thanks to my major sponsors Bike Bag Dude, Thule, JetBlack Products, Shotz and Gordon Street Cycles.