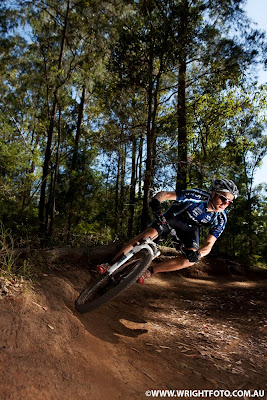 The Pivot 12 hour ran by the Port Macquarie mountain bike club is an event I am always hanging out for. The event is usually a few weeks before the 24hr Solo Nationals and this year it was 2 weeks before. I was really keen to try out my new 1200 lights and get the setup perfect on the Pivot duallies.

I had some Continental tyres to play with and their light weight Supersonic tyres took 500g off my bike weight and I was racing on a 10.2kg complete dual suspension Pivot!

The race started at midnight and I managed to sneak in a couple of hours sleep before heading out to the track. The race started quite fast and I managed to stay with the top riders from the gun. I was pretty keen to race all the teams as there were a few hundred dollars on for the overall race leader. There were a few fast riders there including World 24hr age group champion Sean Bekkers so I knew there wouldn't be an easy race in solo. Tim Wynan was also going to be a top contender considering his consistent improvement.

There must have been a group of four of us that stayed together for the first half of the race then I ended up riding by myself. My aim was to maintain around 30 minute laps so I could sneak out for 25 laps. I was thinking the laps were around 10km so I was hoping I would come close to hitting the 250km.

I couldn't have done it without my awesome support. Especially Jen who gave up her race to pass me food!