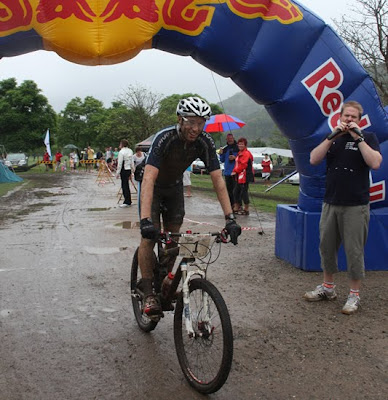 This was always going to be an important race for my sponsors and I. My major sponsor had the naming rights of this event! JetBlack really had the pressure on as I only committed to their sponsorship proposal about a week before the event. They had to source wheels from one importer, Fox forks from another importer, and the Pivot frames and other components from the USA!

The bikes arrived at our cabin at 9am on the day of the race! I had three hours to get use to the new bikes. My first thoughts were "wow, these things are amazingly specced out, and mmm..... downhill bars." I thought surely I could get some flat bars before the race but it didn't quite happen. I lowered the bars as low as they would go and after playing with the seat position it was time to start racing!

I hid in my tent for as long as I could near the start line as the rain was still sprinkling down. I wasn't too optimistic about the weather considering the forecast and I was prepared to ride through the 24hr in heavy rain.

My plan was to start out carefully during the day and try and get used to the bikes before winding up the tempo during the night. The race plan changed a little when I found out how much road was in the course. It took a few laps to work out who the players were. John Blankenstein, Shane Taylor and I were lapping around in similar times.

I tried to change bikes every few laps as I had two awesome Pivot Mach 4's at my disposal and had them modified before each bike change to try to get them set up comfortably. This mostly involved tweaking shock pressures and seat positions. I was hoping to get some flat bars put on during the race but after a few hours they were just part of the bike.

About three hours into the race I was lapping around with John and we worked out I was a little quicker down the hills so each lap I would try to get into the downhill first. This gave me the chance to make some time up so I could ride the rest of the track at an easier pace before he caught back up again!

For the next few hours as the rain started to come down I changed to clear glasses and made sure I was swapping out bikes regularly. The guys from JetBlack were cleaning the bikes and it was as if I was getting on a new bike every 2 laps!

I continued the same race strategy with John, each lap I would head out a little bit earlier due to faster transitions and downhill times and each lap he would effortlessly catch me on the climbs. I enjoyed having a chat to John each lap and it certainly made the time pass far more quickly despite the conditions. As the night started to approach the rain was getting harder and the track was starting to have huge puddles form across it. It was often luck if you could ride a whole lap without unclipping or without sliding out especially with light weight fast tyres!

At 8pm the race was put on hold and I really wasn't surprised. The rain was falling so hard it was becoming difficult to see but the track conditions weren't really getting much worse. I was lucky to be running NiteRider 1200 lights that are amazing and I felt sorry for those with less because of the track conditions. I was getting so much mud in my eyes despite awesome glasses and I was glad to be able to give them a rest.

I woke at 5am (ready for the announcement of whether the race would restart) to find that one of my eyes was swollen and unable to open properly due to the amount of mud that had snuck in. The eye wasn't focusing well and I thought I could be in a bit of trouble. In the end I hung out with the first aid guys for a while and soaked and washed out my eye. With the race not restarting until 8:30am for me, my eye had a chance to recover.

Heading out at 8:30am I had a three minute head start on John. I know he is a fitter rider so I was considering just riding easy for a lap and letting him catch me so I could ride with him for two hours before racing him in the last few laps. I was talked into having a go and so I started off pretty hard trying to maintain the gap. We were very close for the first 1.5hrs before John had a few bike issues and the time gap grew.

By the time midday came, I was pretty keen to come across the line and shower up! A big thanks need to go out to JetBlack Products and Pivot bikes for getting me the bikes sorted in time. I think they are going to be awesome 24hr bikes! Already they seem to be a lot more plush and I can't wait to get them set up properly. The guys working on my bikes during the race were fantastic. Jen always likes a hand with the bikes as it allows her to focus purely on the food stuff.

I need to also thank Gordon Street Cycles for getting the mud off the bikes post race, Adidas glasses for keeping most of the mud out, Jen for playing in the rain and sorting my nutrition (and washing my muddy clothes) and Shotz nutrition.