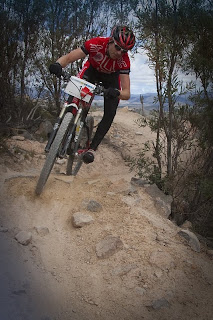 Looking ahead to the world championships to be held at Mt Stromlo, Canberra next year I have a lot of training to do! Right now my legs are pretty sore even after riding to heart rate and trying to take it easy on all the climbs. I guess when you are doing over 9500m of vertical climbing it doesn't matter how hard you go it is still going to hurt.

I love how the CORC club run their 24hr events in the middle weekend of the NSW school holidays as it gives me a chance to get down to the event and allows time for a sleep in on the Monday morning.

We rego'd on the Friday afternoon and enjoyed the hospitality of Jason and Kylie McAvoy. We were treated to a tasty high carb dinner and a comfy bed. What a luxurious way to prepare for the big race!

After sleeping as long as possible on the Saturday morning, we arrived at Stromlo around 10am with heaps of time to get sorted. I think Craig (aka Spoon Boy) and I have come up with an optimal tyre pressure for the z-mins and I relied on Craig's digital pressure gauge to ensure I had the perfect tyre setup. Jen pulled out my gloves and found some significant wear so it was time to chat to Jetblack about some new race gloves. While I was there I managed to get my hands on the new NiteRider 200 which did a perfect job of providing a bright spot to shine through the NiteRider Trinewt.

On the start line there were around 200 solo riders. Being able to start on our bikes gave us a head start on the team riders who had to run to their bikes. I decided to start on my hardtail as I have been enjoying this bike recently. On the gun Shane Taylor worked his way off the front and had established a significant gap before having to stop and ask for directions around the midified first lap. Once he had his bearings, he was off again. I was determined to ride to heart rate and let him go trying to keep my HR under well under 165bpm.

The team riders just started to catch us at the top of the first climb and I enjoyed trying to race them down the awesome downhills. Once the first climb was out of the way most of the track was downhill. There were some sections that I really looked forward to each lap.

At the end of the first lap I had caught back up to Shane and we rode around for a couple of laps together. During the 3rd lap I was rudely cut off by an ADFA rider who was lucky not to cause a serious crash. We must have been doing around 35km/hr heading down to a single file bridge when this rider made solid contact with my handle bar as he barged through. It might have saved him two seconds! I later decided to overtake this speedstar just to gently show him that he may not be as fast as he likes to think. I don't think anyone should be so serious they have to ride dangerously.

Once I settled the pace down again I did a few more laps on the hardtail and made an attempt to make the longest wheelie mark mine. I held it for a couple of laps and I take my hat off to the rider who constantly beat my mark, very impressive!

I made the swap to the dually just after the 4hr mark to have a little more fun. It felt like cheating riding the Fourstroke 01. It is just as fast as the hardtail just with the super comfort of four inches of travel. I did one more lap on the hardtail while the lights were getting put on the dually then I stayed on it to the end of the race.

Heading out on the first night lap I was really interested to see how it would differ to the day lap. It was definitely smoother and faster and it was nice to have a change during the race. I was sure I had sufficient sleep on the Friday night but I really found it hard to stay awake during the night. I kept questioning if it was a lack of energy rather than sleep but it was sleep deprivation that made me back the pace off. The lights were fantastic and I got to use the new NiteRider 200 lights on my helmet during this race. They seem to have a more obvious bright spot which is perfect for a helmet light.

When the sun came up in the morning I forgot about being tired and once again started to enjoy the day laps. Just like last year Ed Hood kept me company as we rode out the last few laps. During those laps, most people had accepted their race position and the atmosphere on the track seemed a whole lot more relaxed. It kept me entertained racing people down the awesome downhills over the back section. On the last lap I approached the beginner downhill and sped up to try and get past two riders who appeared to be socially riding around the track. They, like me, were after a clean run down this section and were deliberately stalling. When I called track they yelled back at me "no chance!" and took off prompting a chase down the hill. How fun was this track and the opportunity to race anyone and everyone down it!

Coming across the line I was tempted to pull a wheelie however there were no requests so I just rolled over the line. A couple of post race interviews later and I was happy to take a seat and chat to the other competitors, especially the school group that came down from my school. I had totally neglected fluid replacement after the event and almost fainted at one stage when talking to some of the kids, oops!

I need to thank Jen for supporting again and giving up another weekend. I guess I do owe you a few now! It was also great to have some of my family at the event and everyone else who helped get me on the line.