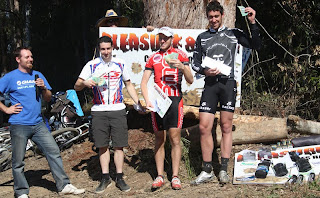 It was a tough decision weather to race the Pleasure and Pain in Coffs Harbour or travel down to the Sydney 12hr. The local club made the decision easy with the offer of accomodation for a media shoot! Free accomodation, I had planned on staying in the back of the wagon. The pleasure and pain had already began, the pleasure of getting a good night sleep rather than the pain of trying to sleep in the car!
Turning up to registration I still hadn't seen an entry list but if they were giving me the no.1 race plate I begain to think there may not be any superstars, I was wrong! The Rockstar boys had decided to drive up from Sydney, Mark Fenner brought with him a select group, Mark Fendo and local Geoff Gilchrist where amoung other fast riders on the elite start list.
Saturday afternoon I managed to get a quick sneak around the track and it looked great. I was pretty keen to be riding four laps of this course. I was suprised with how many other people were out from all over the state and QLD to check out the course. There was one section of the track that Evan Jeffery took us on. We followed him with complete trust, at one stage we didn't realise he was takingn us on the A line along a log ride until we had committed. I recall complete silence along this section of the ride as we all held our breath. It was very funny, I found I always managed to ride the far easier B line during the race!
The race started with everyine taking off at the same time. I wasn't too keen to be eating dust down the first couple of hills and recall sprinting off the line despite my plan for a conservative first couple of laps. I somehow also managed to end up on the front of the group for most of the first lap, which I thought was pretty quick. The second lap was even faster as Hamish Elliott moved to the front. He attacked us about half way through this lap however, managed to lose a spring from his derailer and was unable to finish.
I think I moved up the front again to keep the pace going until Troy Glennan put the power down. This guy is a machine, every fireroad he was smashing me. There were several times where I was keen to let him ride away. At about the 70km mark Troy went straight into some bunting as he was possibly going a little too hard. I snuck through in front of him and tried to maintain the rediculous pace he was setting. I looked behind me as I went through transition and I had about a 40 second lead. I decided to give it everything to see how long I could stay away from the chasing riders. At the top of each hill I was glancing behind to see how I was fairing. With 12km to go I was only 20 seconds in front. My legs were starting to fatigue and I was starting to question my muscular strength. I was still trying to hit each hill in hard gears however I could only spin over the top of each hill in a lowish gear as the effects of a solid pace from the start were being felt. The last 5km of each lap are mostly downhill and I new it would be hard to make up time here. I just needed to pick safe lines and not fall off! I rode as slowly as I could up the final hill to the finish as my legs were pretty smashed and finished around 1o seconds ahead of Mark Frendo. Troy Glennan came in third. The final time was just under 3hr 59min. That's a pretty fast 100km race!
I need to throw a massive thanks to the Coffs Harbour club for their work on the track and running the event. It was a massive improvement on the previous years where they have had event promoters try and organise the race. They looked after me really well and provided very generous prizes to riders in all categories.
My BMC was awesome, it was a little strange to ride a hardtail again but it felt great. Check out the superlight wheels sometime if you get the chance.
I think my nutritional strategy for the 100km event is almost perfect. I ran a bottle of water on the bike that I barely touched, Shotz electrolyte in the camelbak and Shotz bars and Gels for carbohydrate. I really did feel like I had heaps of energy all race. I just need to work on the strength!
Gordon Street Cycles are also an important part of my race. Once Darcy has checked over my bike before a race, I know it will run perfectly!